Well, it seems like it's going to be one of those rare winters when we are visited by Snowy owls in the lower mainland.
Audy and i saw our lifer Snowys behind a fence at the golf course in Boundary Bay back in 2007, it was cold back then when i digiscoped them but pretty neat to see. Back then, i wasn't really aware what a problem birders had with photogs when it came to owls but over the years i've grown to understand the concerns.
Of course it's not just photogs but anyone who wants to see a Snowy Owl in the wild around here that could be percieved as a disturbance to these birds. They come down this way i've heard when there is little food up north, they are hungry and when too many people disturb them, they don't feed. I get that.
It was suggested by a well-known birder recently that photogs "should get their shots and get out", i know what he was saying and don't take offense at all, it's when the bird starts getting chased too much that problems arise. I know some spend a lot of time working the birds around here, hoping for flight shots etc. and i want to do this also, but i've decided to wait until i visit their habitat up north.
In places like Barrow Alaska etc. Snowys can be plentiful, all the more reason to take that trip up north one spring.
I definately think everyone should get a chance to see one of these beauties if they so desire, just not sure we (as photogs) should be spending multiple days working these particular birds.

So, since Audy wanted to get out and see these guys we made a morning trip out yesterday and got lucky with one bird.
It eventually flew off and was chased again by a few, but my looks were good enough and since Audy and i were both freezing anyways called it a day. 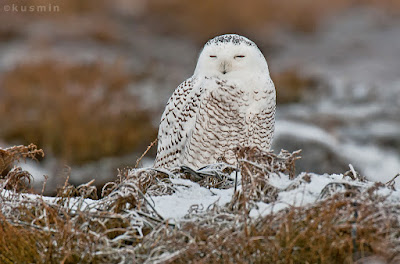 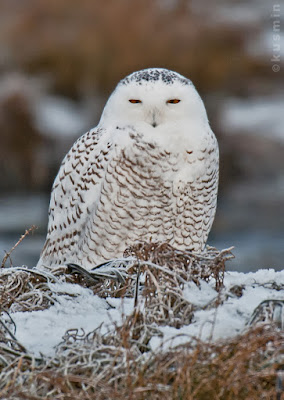 I'm actually more excited about a non-owl species i'm planning to go after next weekend LOL, they are all good as far as i'm concerned.
Posted by Paul Kusmin at 4:12 PM