Oct 19th
It rained heavy during the night and i began to fear for our Caroni trip in the morning, i hoped it woul be dry.
I gulped down a coffee first thing in the morning and Audy grabbed some fruit and juice before our driver for the next two mornings Maneed put the maxi-taxi into gear and drove us down the windy hill to the Caroni swamp, thankfully, it had stopped raining..
We would be using the services of Madoo's, i had read birding reports that recommended them so i knew we were in good company. We waited for our boat man Shawn to arrive, a worker type guy dressed in blue was sitting by himself perhaps waiting for a ride to work. 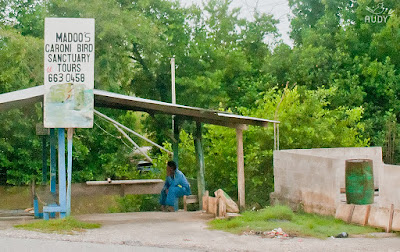 Eventually Shawn arrived and we drove to the visitor centre and a small dock.
He tried to show us a rail nest but said recent floods in the area had destroyed the nest.
We heard the calls of the Grey-necked Wood Rail and eventually even saw the birds briefly near the dock, i tried to get a clear shot but was unsuccessful. A good sign was a Scarlet Ibis near the dock as well, we tried for it and it flew just before i was able to get a shot, there would be more ibis before the morning was over.
I was extremely pleased when a Red-capped Cardinal turned up in the parking lot just before the trip and i was able to get some decent shots of this target bird. 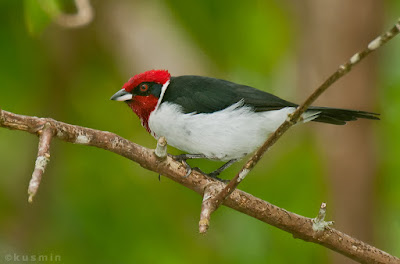 Soon we were off and Shawn showed us a few of the special birds he had staked out. 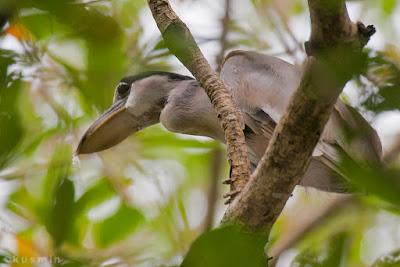 rare Boat-billed Heron high up in a tree.
This wasn't a new species actually, we saw them up close in San Blas Mexico in '07. 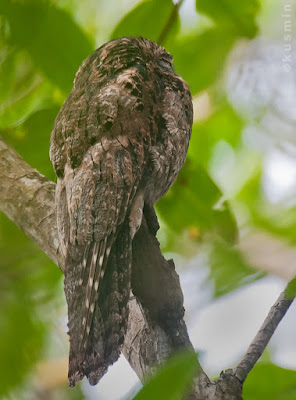 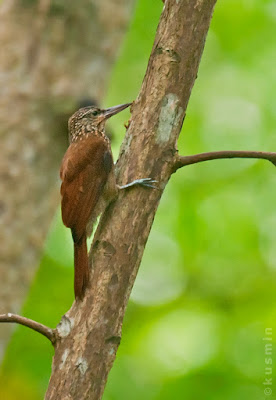 Straight-billed Woodcreeper
We saw a couple of Scarlet Ibis high up in the trees as well during our boat trip and i took some shots as well as a few of an Osprey hunting ahead of us. 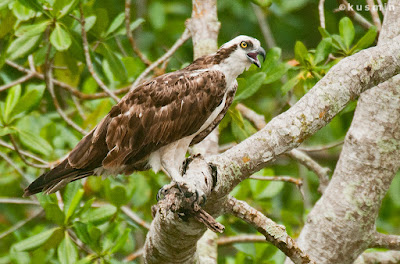 At one point Shawn asked us if we wanted to take a small side trip out to open water to see pelicans and frigatebirds on roost, that sounded pretty good. Suddenly Shawn turned the boat around and slowed it to a crawl, he proceeded to pick something up out of the water, it was a Scarlet Ibis feather, beautiful crimson red with a black tip, he gave it to me and i put it away with the intention of using it as a bookmark in a book or something. Later i would reconsider the decision, i rememeber reading a poster at the Piarco airport about declaring any feathers or feather products, i know Canada has a similar rule so if i wanted no questions, i could "smuggle" it, but it was risky. When i thought of that i realized i could never take it out of the country, it was this beauty in the feather that drove the species close to extirpation in Trinidad, until it was declared the national bird of T&T, even then poaching has continued to be a problem, i didn't want to contribute to this no matter how innocently the feather was acquired, we left the feather in our cabin at Asa Wright when we left. 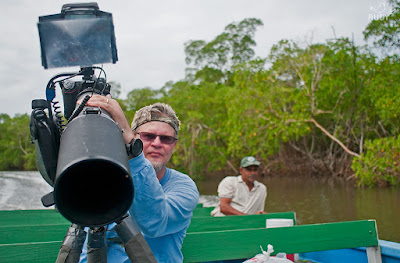 We checked out the pelicans and frigatebirds and i was pleased to see the frigatebirds had their red throat pouches on display, in Mexico we hadn't seen this in the birds. 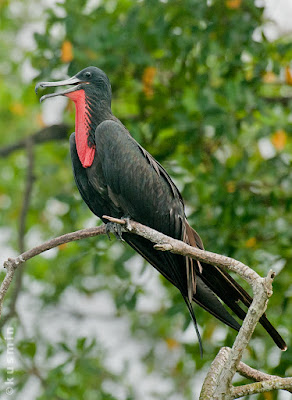 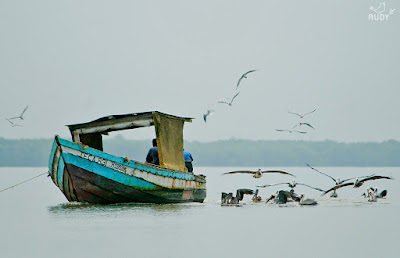 We cruised back to the dock and thanked Shawn. Deciding to have lunch there i took a quick walk around the grounds behind the visitor centre and saw a small flash of scarlet red! I couldn't believe it, 4 Scarlet Ibis up close feeding with a Yellow-crowned Night-heron, up close!
I ran back to the maxi-cab and grabbed my camera and proceeded to sneak up on the birds best i could.
Great success, i got some full frame type shots of one of the main target birds of the trip. 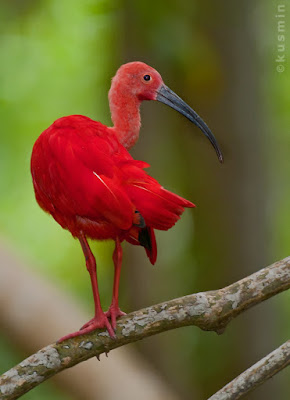 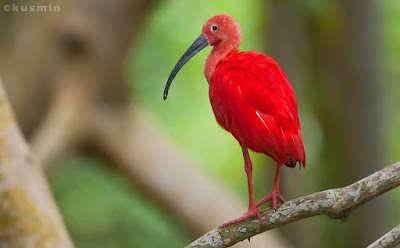 Later Maneed drove us around a bit, The road beside the Caroni rice fields was birded briefly, in times of less rain, the rice fields can be walked, now however it wasn't a good idea. We saw Yellow-hooded Blackbird, a smaller version of our Yellow-headed Blackbird. 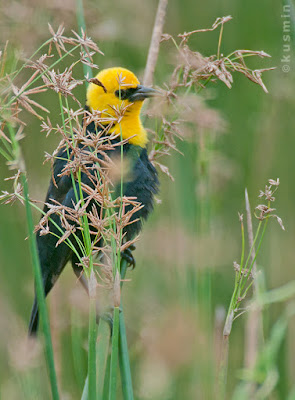 We tried to access the Trincity sewage ponds but the gates had been locked in recent times and the trails and ponds inside were no longer birdable. On the way out i spied a major target bird of mine on a wire overlooking a stream - a giant kingfisher by the name of Ringed Kingfisher.
I wish we had stopped on the highway and at least tried to get a shot of it before it flew. We saw one more of the species that way on the way back to Asa Wright and again we didn't stop and i could just watch it as we drove past. I asked Maneed to make a special effort tomorrow after Aripo to get this species and he agreed. Fingers were crossed as it really is an amazing kingfisher.
Back at Asa Wright i continued to attempt to shoot the species coming into the numerous feeders around the veranda. 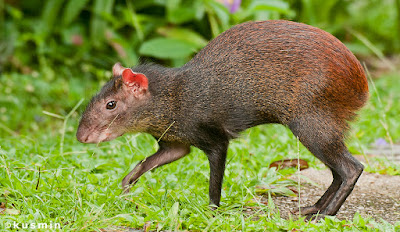 Agouti
a hunted "wild meat" species in T&T, they find sanctuary at Asa Wright and thusly, there a quite a few of these gentle giant guinea pigs around. 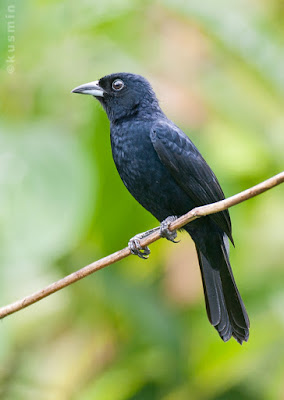 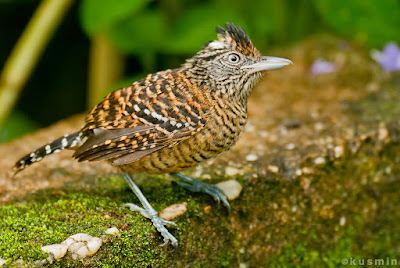 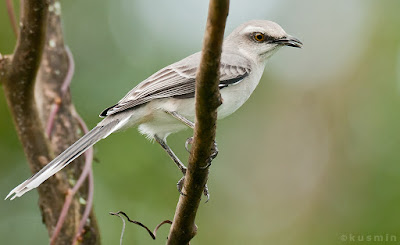 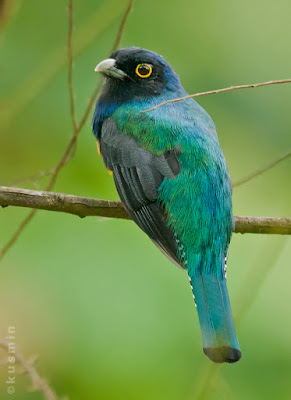 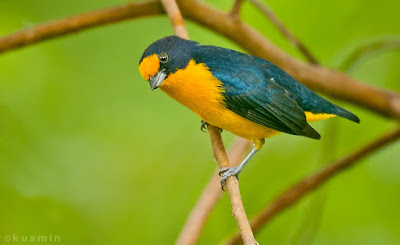 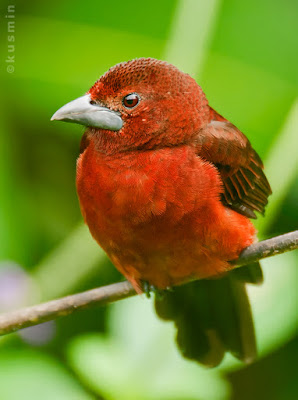 Silver-beaked Tanager
Another successful day in Trinidad, a lot of good shots,a memorable boat trip through the mangroves and a promise of more tomorrow, we slept well that night.
Posted by Paul Kusmin at 9:07 PM