It was turning into a lazy rainy friday until i checked the local web board and was surprised to see a Painted Bunting just now reported in the "Vancouver area".
The bird was coming to a feeder on a private property but the owner had to be contacted before birders would be allowed to view it.
I chilled, took a quick nap and Pipit joined me in a cat-nap.
After waking i checked the board again and a number had been released.
A phone call later i was on my way to West Vancouver.
Shock on arrival when i was informed by a somber group of birders that the bird had been chased by a Anna's hummingbird and had flown into a window.
Prognosis wasn't good but the bird was in a shoe box and i decided to hang for a bit, others in the group were dispersing but i had nothing else to do and in a while the owner came out and asked for advice, the bird had come back to life and was jumping round in the box and chirping.
Ultra birder Mike Toochin went in to take a look and came out with the bird in hand.
I am always amazed by the small size of the birds in "real life" as opposed to through my viewfinder.
This bird was no different, soo cute, as Mike was letting it go Super birder Wayne Weber arrived and while i was able to get a look, Wayne saw only the bird taking off into the bush, alas.
We were all relieved that the bird seemed ok, Mike and Sharon left then and Wayne and i hung out and watched the feeders.
The owner was leaving for a bit but was happy for us to remain as long as we wanted, we were grateful.
While we watched the feeders i asked Wayne about meeting Roger Tory Peterson (RTP) way back when.
Having been a birder for over 40 years, Wayne had a few stories and i was happy to soak it in.

Suddenly a flash of red flew towards the feeder and we realized it was the bunting.

It disappered for a while and we weren't sure if it had flown off, there was a bush obscuring part of the feeder and finally we moved our position to the other side of the driveway to get a better angle.
Suddenly i spotted the bird poking it's head out of the bush.
It's a bit of a skulker and was in the bush the whole time we were wondering where it was.
At that point i was able to get a couple of decent shots, the other times (around 4 while we were there) it would fly directly onto the feeder and i suppressed the trigger finger, a branchy perch was desireable. 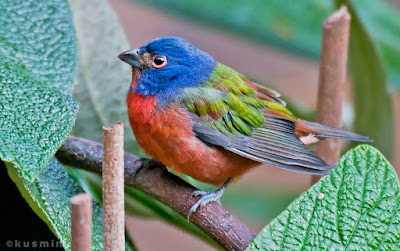 Painted Bunting - West Vancouver November 18th, 2011
It was getting cold and my bare fingers were feeling it, Wayne and i were both satisfied with our brief looks and left, happy that the bird seemed fine, my concern was for the cold night ahead of it, if the juncos and sparrows can survive though, this guy has a good chance too, i hope.
Posted by Paul Kusmin at 5:32 PM