Trinidad and Tobago - Part 7 - back to Trini, Divali, and the Final Chapter

Oct 26th
We met Max again and he drove us back to the airport in the morning, our flight was at a decent time for a change, no need to hustle anymore, we were in the end stretch. 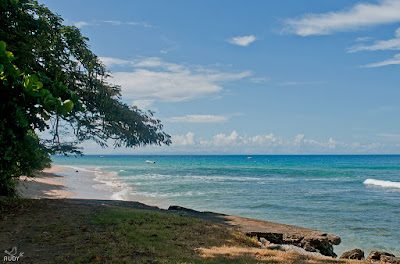 one final shot from Tobago
Our flight back to Trini went off without a hitch, soon we were in a cab on our way to the Holiday Inn Express Piarco, a hotel about 5 minutes drive from the airport. It is also really close to the Trinicity shopping mall but we weren't sure if it would be open today, you see, it was a national holiday, an east indian festival called Divali and a festive time when candles are lit. I was glad that my online reservation was found as i couldn't remember if i actually made it, i was 90% certain, it's not like the hotel was full up anyways.
We crashed for a bit in our room, taking note of the television, sweet.
First though, we took a shuttle bus to the mall looking for a bite to eat, we were both hungry and the Holiday Inn didn't have a restaurant. We found a KFC and tried the fried chicken, it did taste a little different than what we get up here but still the same fast food when all is said and done.
It was interesting to see a large group of KFC staff out back of the restaurant practicing a dance routine, they were taking it seriously, chanting loudly "So Good!" and "KFC!" while doing some sort of chicken dance, i'm not kidding LOL.

Later back at the hotel we tucked in for a night of foreign television. Ever since watching spanish TV in Mexico we have been hooked on local TV.
In Trinidad, there were east indian channels, american channels and a south american version of  TLC.
I was pleased to be able to watch some episodes of a travel show i only ever get to watch when travelling myself, Anthony Bourdain's No Reservations, i think i first saw it in Arizona or Texas and love the food and travel angle, he seems like a cool dude as well.

Since it was Divali we decided to watch a sub-titled east indian Bollywood film, some kind of Cinderella story with an evil step-mother and step-daughters, naive husband who seems easily way-layed, a coniving uncle (and his doofiish henchman) and a godess named Laxmi watching over our innocent Cinderella.
The best part was the ending when the evil uncle got his eyes clawed out by a hawk, now that's justice.

Oct 27th
Ok, it's go-time, destination home.
We took the shuttle back to Piarco for one last visit, checked our bags and made sure then were checked all the way back to YVR (i didn't know that we would all have to claim our baggage in TO no matter what as it was our port of entry), i was hoping to streamline things, we had two hours when we arrived in TO before our flight to Vancouver took off, if everything went smoothly, it was doable, at least that's what my travel agent told me LOL.
It looked promising, our flight was at it's gate, a crew was at the ready and soon enough we were boarding the craft.
When we were just about to leave the captain came on and announced that they were going to hold back a few minutes as a "part" was loaded onto the plane, apparantly, TO had called and were desperate for a part, i couldn't help laughing to myself, thinking that this must be the part for our plane from 10 days ago, finally getting it fixed i see, Trini-time and all.

There wasn't much of a delay and soon we were taxiing onto the runway. Another announcement from the captain, "flight crew prepare for take-off, we are next in line" then...we did nothing, the plane just idled for like 15 20 minutes before another announcement from the captain, "i'm sorry, there seems to be a problem with one of our hydraulics, we will be pulling back to our gate to look at it".
It turned out that it would take 2 1/2 hours to replace the hydraulic, test it etc. and i knew right then that a fly had appeared in the ointment, yet again.
There was no way we were now going to make our connection.
After everyone had been off-loaded from the plane back into the terminal and given lousy sandwiches i asked the desk about my missed connection, they made some calls to TO and were lucky to secure something for me, it would all be taken care of in TO.
So i relaxed, i wished my ipod battery had not died just then because there is nothing more irritating than drunk Canadians sitting behind you.
These two guys were just having fun, that's cool, i just wish they weren't so loud, my headphones blocked out most of the chatter thankfully, just no tunes.

So we arrived back in Canada, i was relieved, hey at least we were back home, just a quick hop across the country and we would be home. First however, we needed to find out about a new flight, since we had indeed missed the one that left at 11pm. When we de-boarded we were given a breakfast voucher and told we would be staying at the Sheraton located right in the airport, alright! finally something good, it was a nice hotel, really plush, we were a hop and a skip from the domestic terminal and even though we had to collect our luggage, it was all there in one piece.

We slept after watching a bit of TV.

Oct 28th
Our new flight was the next morning, at 7am, we got up early, went to the terminal and checked our bags, picking up our boarding passes and seat allocations. All things going smoothly i was relaxed.
I bought a coffee from the Starbuck's and we waited, our flight was on time and soon we were in line to board.
Things took a weird turn at this point, our boarding passes did not correspond with something in their computer so this ice-cold woman behind the counter takes our passports and says "please wait there on the side for a moment". We watched as every single passenger was boarded and finally, when the plane was ready to take-off they started looking at the problem with our passes. I was confused, i explained that we were supposed to fly but missed our connection due to the mechanical with Caribbean Air, this woman didn't really want to hear it and plunked away at the keyboard a bit and finally announced that we didn't actually have tickets for this flight as Caribbean Air had never paid Air Canada for it. WTF?
It got really bad when they took our luggage stubs and called down to the ground crew that our bags would have to be removed. I was pretty crushed, after everything, we were getting screwed again, so close to home and now it seemed so far after all.
Suddenly an angel appeared before me, a supervisor came over to find out what the delay was, i pleaded with her to look at my flight iinerary from my travel agent, "please look, see? this was our flight number last night.."
She typed it into her computer and right away our names came up on the screen, "well, here they are, didn't you look here?!"  she asked the ice-cold woman, another guy working there piped in at that point as well and said "i think we should let them board", i looked at my angel and said in a defeated voice "please let us go home" and next thing we know, we are ushered onto the flight, finally homeward bound.
I figure we were literally seconds away from missing that flight, we never even got our luggage tags back it was that touch and go.

Well, we were in the air and actually this connection was better than arriving at 1am like we were originally supposed to, it would have meant an expensive cab ride home, instead, arriving at 11:30am we could just take the Canada Line and Seabus back home to North Vancouver.
I still felt uneasy the whole flight back, we were so close to missing that flight i couldn't relax.
I watched the final installment of the Harry Potter franchise, Deathly Hallows part 2 and having read the books, was happy to see the conclusion, Harry had to deal with a number of challenges in the film, i couldn't help but think of the challenges we faced this trip as well, nothing really major in the big picture, but enough to keep us on our toes.

We arrived back in Vancouver, the wind was cold, much colder than in Trinidad but we were glad to be home, Pipit our cat had himself recently arrived back home from his holiday at mom's so it was a happy reunion for all.
Little did i know that i would spend the next 7 days processing the shots Audy and i took (as i said, almost 400 shots posted on Flickr) and writting this magnum opus of a trip report, 7 parts?! LOL.

For those interested to see how many of my target birds we were able to photograph, below is the wishlist and what we got. (N for no, Y for yes, S for seen but not photographed)

Great report Paul, I really enjoyed the read and the photos. I'm glad everything turned out well considering the travel difficulties. It sounds like a wonderful place for a bird photographer.

Thanks for getting this trip report up Paul. Great blog! I really enjoyed reading about your adventures once you arrived but it sounds like getting there and coming home was a bit of a challenge.