On July 11th we had the privilage of going on a whale-watching expedition from a harbour in Petchaburi province (1 1/2 drive down the east coast from Bangkok).
A small group of Thai photographers had chartered a medium-sized vessel for a trip out to sea, the objective, Bryde's whales, (an asian baleen whale species), the trip leader was well-known Thai wildlife photographer Smith Sutibut, who just happened to go to school back in the day with Api (and was FB friends with her, thus the hook-up). We had asked him about certain bird species and he eventually asked us to come along if we were interested in whales, birds would be seen as well.
Cool.

Another early morning and Api, the victim of a bad papaya salad the day before swore she was fine as we stood outside a 7-11 and waited for our ride, Smith Sutibut to arrive.
The only movement in the early morning light was a couple of large rats scurrying about like they had places to go beside the building.
The up-chucking from her that followed was unexpected and i told her that she should have saved some for the birds on the trip, in reality i felt super-sorry for her, no one wants to be hurling before the trip even begins!
Trooper that she is, the show went on and we got picked up and driven through some very birdy mangrove-like habitat on the way to Bang Ta Boon bay.
I don't know what i was thinking but i neglected to bring sun-screen with me, or a hat and paid the price later on (i even knew that the sun's rays were magnified on the water yet did nothing about it), i was enjoying the sun on my face as we cruised out of the harbour and into open water, which was flat as could be, no worries about sea-sickness, just you know, bad papaya salads.
Api slept through most of the trip but was awake for the important moments. 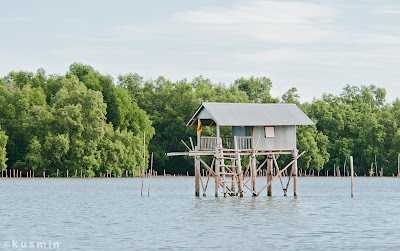 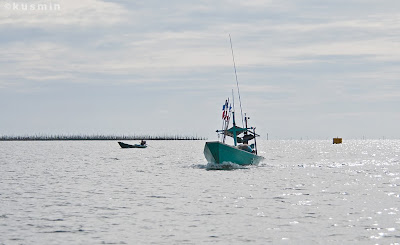 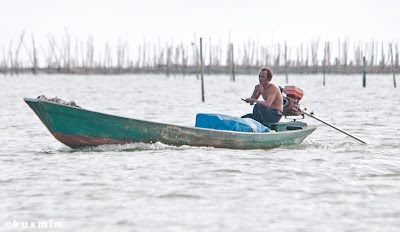 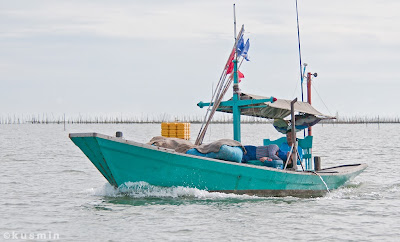 There were some birds too, terns flew by sleekly and some fishing platforms further out to sea provided good roosting and fishing for the many cormorants, herons and egrets that seemed to populate each and every one. 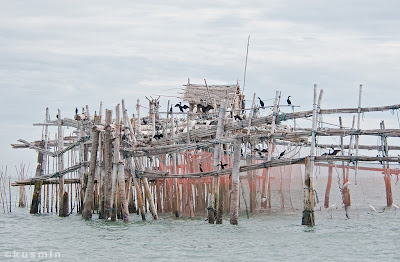 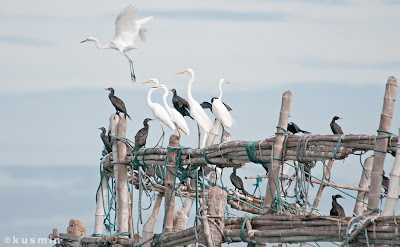 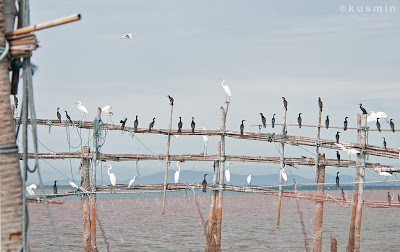 We got some good looks at some birds as well, it ended up being a 9 hour expedition out to sea so we were bound to see a few.
I used the 80-400VR hand-held with D300s and shot away when something good came up, it was nice that everyone on board was fully into the photographing thing, no bird photo-ops were going to get missed this trip. 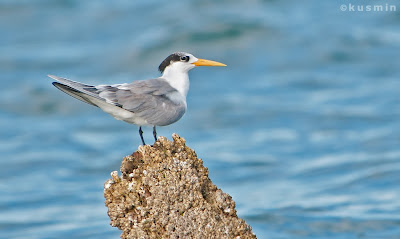 Lesser Crested Tern (Lifer!) and an exciting discovery for those on board 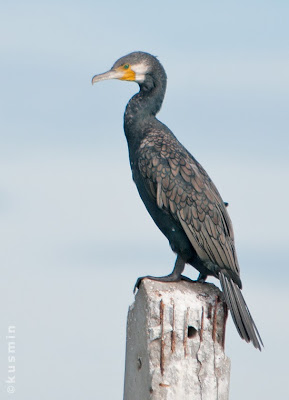 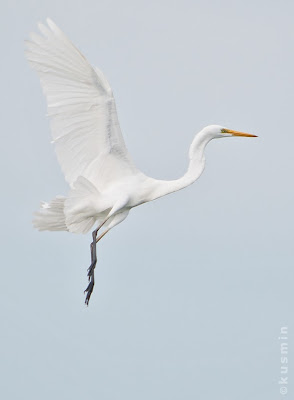 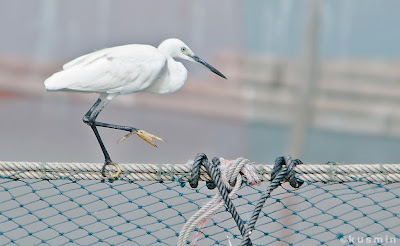 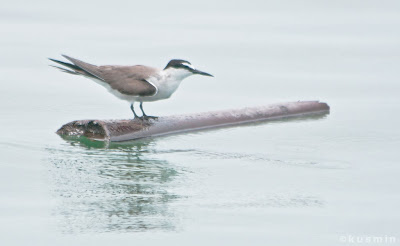 Of course the main objective of this trip was whales and for the first 3 hours we didn't see any.
The boat's skipper had his man sitting on the roof with bins and a radio scanning the water for any breach.
finally there was commotion and speaking of thai and i understood enough that the whales had been spotted!
We had found a mother and child together, diving and coming up suddenly with it's big mouth like an opened clam, neat to see them both come up at the same time like syncronized swimmers at a meet. 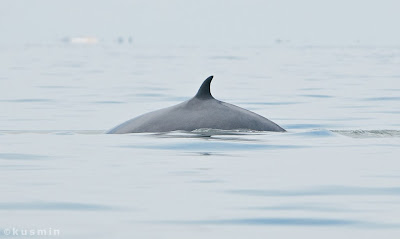 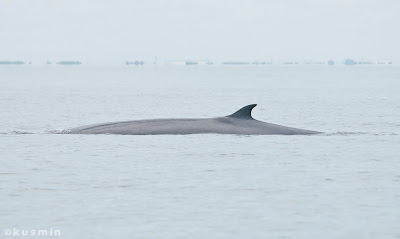 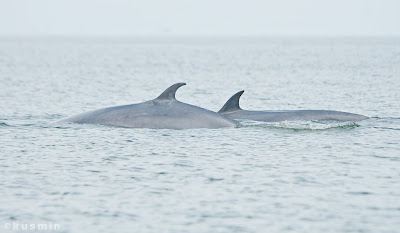 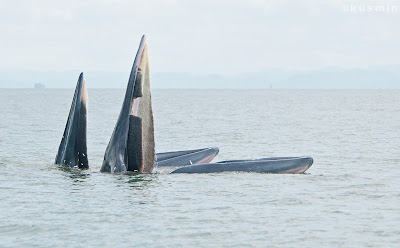 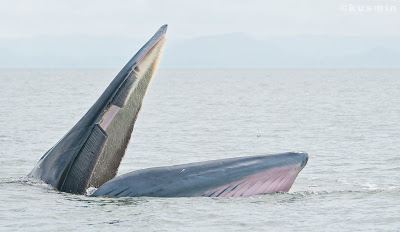 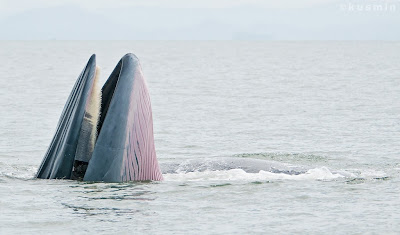 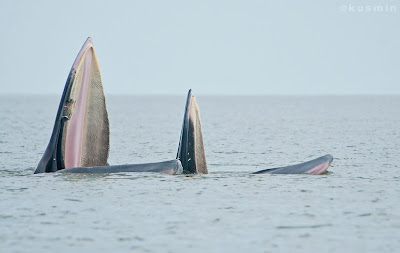 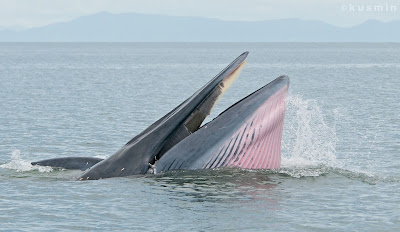 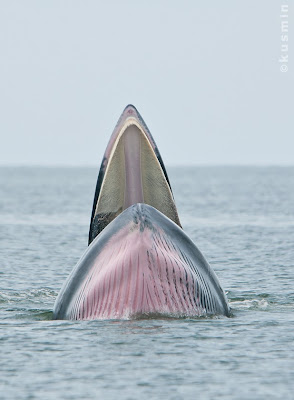 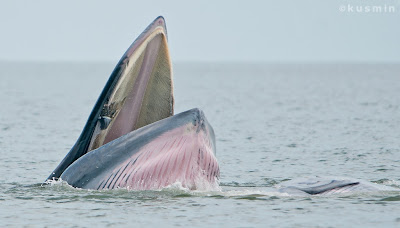 
Here are two last shots from the day, Api looking pretty good for being so sick (with Smith Sutibut in background), and me, starting to show the burn at the end of 9 hours out.  : ) 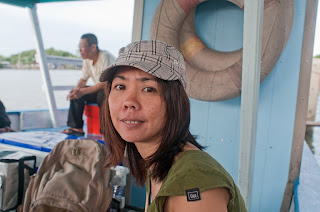 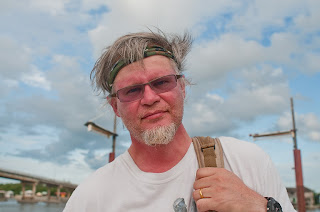