An update on the situation with my lens -
I phoned Nikon Canada yesterday and was told that the repair was on hold pending the arrival of parts required from Japan. I was also told that it usually took anywhere from 2 weeks to 4 weeks for the part to arrive once ordered.
I knew it wasn't going to be an easy fix, i'm not at all surprised that Nikon Richmond sent it to Toronto for repairs.

The estimate for repairs and delivery came out to $600 so it will be repaired, i'm hoping to be back in full effect January 2012, missing a lot of quality shooting opportunities at the moment though.

I suppose this forced break has made me reflect on how much i really love photographing birds and getting out into nature, Audy actually said that maybe i would be happy enough to just go bird-watching, it's just not something i can do though, i would be too miserable if i was ever without a camera when a good bird suddenly posed in front of me in good light.
Sure, i've got the 80-400VR and will use it when i need to (Clay-colored Sparrow) but i don't enjoy using it, my 500mm is a part of me, we have been through so much together - Thailand twice, Texas, Arizona, California, Ohio, Trinidad, Tobago not to mention the frequent weekly after-work/weekend excursions here in BC.
It's weird too, i kind of think that when the lens comes back we will be even closer, it's back was effectively broken, the side impact of tripod falling over broke it into two pieces, there were many broken plastic bits inside the lens as well though the glass and body exterior were spared any viewable damage.
While i didn't break my back, i did damage my spine from years of mountain biking and had surgery and even though i walk with a slight limp now because of it,  it hasn't slowed me down much.
I don't expect that this injury to my 500mm f4 AFS-1 will slow it down either once i have it back in my arms.

I'm old-school, i remember bombing down the steep single-track trails of the north shore back in the early 90's on rigid front forks! = Off-Road Toad bikes reprezent! =  full suspension was still a dream, back then, you really had to know how to ride, nowadays i imagine the kids just bomb over everything on their plush full squishee bikes LOL.

Now to the "bling" part of this post, the crash was so severe that my beloved Jobu BWG-Pro gimbal head suffered. The cast aluminum swing arm attachment was torn in two upon impact, don't quite still know how that happened but i knew that there would be no problem getting a replacement part from Jobu and emailed then with a pic to demonstrate. 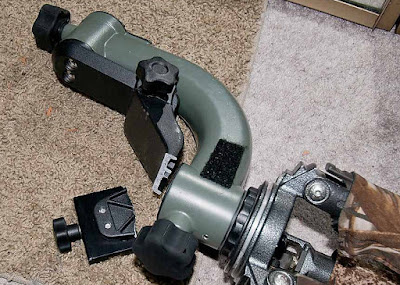 Jobu is a Canadian company that specializes in making high quality equipment for professional wildlife photographers. Their Black Widow Gimbal - Pro head was the bomb, and i used it and slightly abused it during it's many adventures. I also loved that it was green.
Anyways, Jobu got back to me right away and one thing led to another and i'd now like to introduce you all to the BWG-Pro 2 head, the ultra-bomb, i'm stoked of course, but what really makes me nod my head in appreciation is the fact that they sent me one of their factory-only green heads as a replacement! 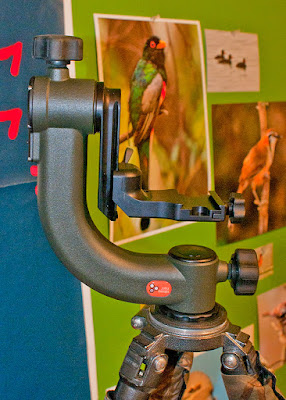 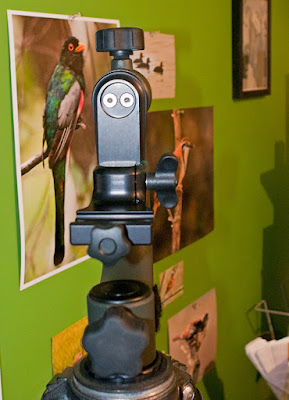 I had seen the Pro 2 head in the stores earlier in the year but it was always in black, the retail colour.

The improved CNC'd swing arm is a big improvement i think and i can't wait to test it out with my 500mm f4 in the new year.

props to Jobu!
Posted by Paul Kusmin at 1:21 PM No comments: Northern Shrike - Iona, Richmond.
This pic was bought by Birdwatching magazine and used in the December issue, gotta like that, right? Red Crossbill - Maplewood Flats, North Vancouver.
It was a toss-up between this and a Red-necked Phalarope, crossbill wins cause it was shot on my home turf. Blue-winged Warbler - Cuyahoga Valley National Park, Ohio.
I was using Matthew Studebaker's PDF guide to shooting locations in Ohio and he described a particular area of the park where these warblers were known to have territory every year.
I got looks of them the first day but it was the second day (i went back the next morning) that really stands out to me as one of those special moments.
I made a print of this shot and it turned out really nice if i say so myself Purple Honeycreeper - Asa Wright Centre, Trinidad.
This must be my favourite bird from Trinidad.
I was able to get some close looks by working the feeders, it just looks so exotic Copper-rumped Hummingbird - Cuffie River, Tobago.
The hummers on both Trinidad and Tobago were quite amazing, even with a number of species males holidaying in Venezuela, the opportunity for close looks at even the most common species (this being one of them) were worth taking.
I made a print of this gem and it hangs by my desk at work, to remind me of why i work

Took the 80-400VR out after work today since i needed to do some shooting and it was so nice.
I stayed on the shore and hiked in the snow at Mount Seymour looking for Pine Grosbeaks and White-winged Crossbills, both of which would be lifers. I must have been the only guy in hiking boots up there

I'd like to say i got a shot of a White-winged Crossbill but photo proof is inconclusive, more than likely Red Crossbill.
Aw well, at least i made it back down without slipping once

I decided i need a sure thing to make me feel better, and made my way to West Vancouver to check out the Clay-colored Sparrow coming to a feeder. The address is posted on the Bird Report BC website for those interested.

I was the only person there and would like to thank the owners for their hospitality towards birders, i didn't see them the whole time, but thanks I haven't mentioned yet here that my tripod fell over a few weeks ago now and broke my 500mm f4 lens in two.
Nikon Canada surgeons in TO are working on it as i type these words, my estimate from them for stupidity was $600.
A lesson learned.
Now let's hope they fix the lens soon, i'm missing my baby ; )
Posted by Paul Kusmin at 6:52 PM No comments: