After the exploits at KKC and the family wedding of one of Api's cousins at a swanky hotel in Bangkok (why did i feel soo under-dressed?, they said it was casual, i guess suits are casual over there..), which we crashed right when the buddhist monks were chanting their sanskrit prayers (nothing like making a good first impression), we were on to our next birding destination, Khao Yai (the Alberta of Thailand apparantly due to cattle-ranching and it's famed beef steaks).
We brought Api's mother and sister along and chose a Thai resort that just happened to be next door to the Greenleaf Guest House, and Mr. Nine, our guide for our day at Khao Yai National Park.
I had only two requests of him - get me hornbills (any will do, this nemesis bird was long overdue) and Banded Kingfisher.
It was the 2012 trip report posted by another birder who used Mr. Nine's services in the rainy season of July that inspired me (Api phoned him and talked in Thai) to contact him.
I had wondered how much rain i was going to see and had been surprised so far at the lack of it. It was hot though, and the bane of this northerner - humid.
July 08th
Another early morning and we awoke from our traditional Thai-styled cottage to great an agreeably cool morning.
As the outdoor lights were still on we were witness to a fantastic sight, the resort cats and their young kittens were all feverishly catching and eating tons of these winged termite type insects, attracted to the lights they would soon be a quick snack I guess they tasted good or something..

We met Mr. Nine at 6am at the Greeenleaf Guesthouse and i drank instant coffee before we drove off to the park.
After paying the entrance fee (400baht for farang like me but much much less for Api) we arrived at a trailhead, leech socks were put on and i could see that the trail could be challenging for me and my 500mm & tripod.
Walking with the camera and lens down low near my mid-section in front of me and with tripod legs shortened i was able to follow along no problem, especially without any cumbersome flash accessories (i decided to go flash-less this trip, and except for the first day at Train Park, all was natural light shot).
It was still kind of dark and grey inside the trail, a light rain came down but it was hardly noticed.
Mr. Nine would listen for hornbill calls and eventually we came to some large fruiting fig trees and i got my first shots of a hornbill, Wreathed Hornbill to be exact.
As well we got some shots of my first Great Hornbill.
The search of area for Banded Kingfisher came up short but there were a few more locations that Mr. Nine knew of and all was not lost.

I wish the conditions had been better for these shots (the tree was actually in some low cloud), and you couldn't really angle yourself into better light due to the dense cover of forest so we took what was there, happily. 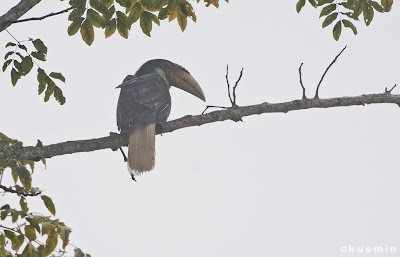 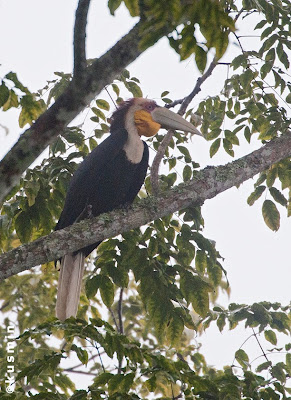 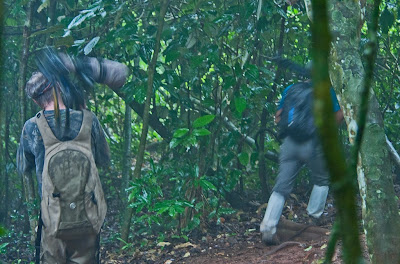 After the forest-trekking it was time for breakfast before heading out again, the visitor centre by the creek had some nature trails, some small bridges and food stalls.
A number of benches were set up canteen-style under cover, which was where we got our first (and only) close! looks of Oriental Pied Hornbill, one of the smaller and more common species. Api had the 80-400 and was able to squeeze off a few shots before they flew off suddenly, i could only watch as the birds were way too close for my lens. Oh well, at least Api got a record shot. 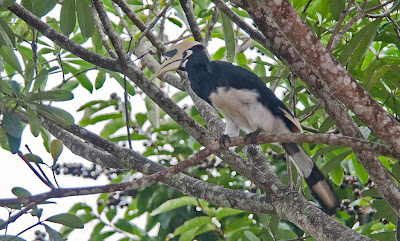 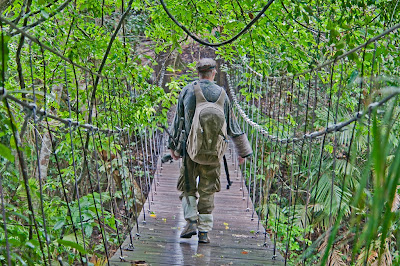 One of the suspension bridges near the visitor centre.

After fueling our bodies it was off to a campsite area i know well from previous visits.
The rain had been coming down more steadily as the morning wore on and it was soon time to throw some nylon rain covers over the 500mm, i had stupidly left my snazzy lens and camera covers in the luggage back at the resort not thinking i would need them based on the trip weather so far. Not so!
I needed them, saw some leeches on the grass as well, creepy little things the way they inch-worm their way towards you. Happily neither Api or myself got one leech this whole trip, i had one actually, on the lens rain cover at one point and deftly flicked it off with my finger.
The campsite area was productive with a few fruiting trees bringing in birds. 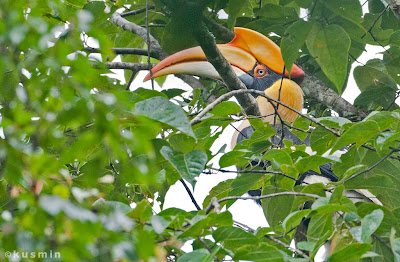 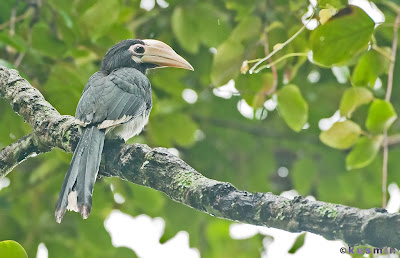 The hardest rain of the whole trip came during these looks at the Great Hornbills near visitor centre.
No Banded Kingfishers however, we found the nest but would have had a long and unpredictable wait for bird, to either exit or suddenly appear from hunting. 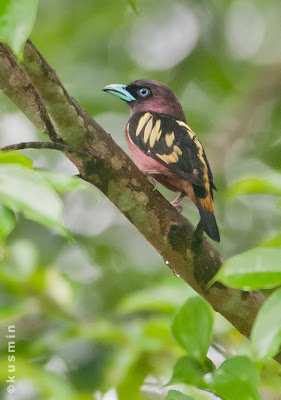 Banded Broadbill was a Lifer! 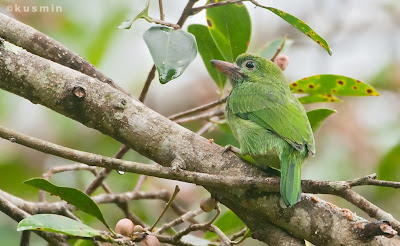 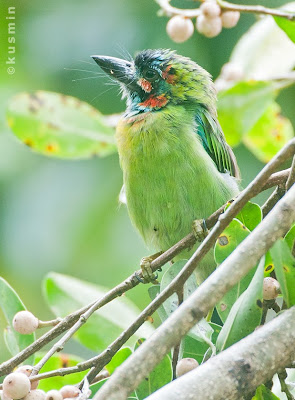 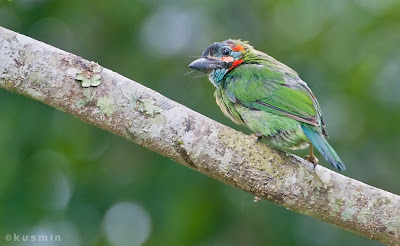 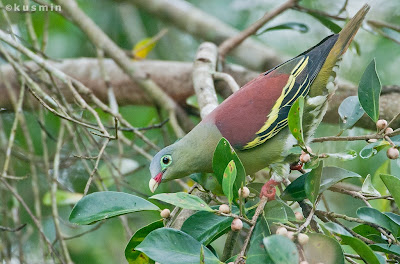 We also met one of Mr. Nine's sons out shooting with a couple of friends, he was dreaming of a D4 and trying his buddies out on the same birds.
Mr. Nine metioned later that he wanted to buy him one as he showed some talent, totally cool.

After the campsite and due to the rain we decided to drive around a bit in the back of his covered pickup truck and shoot from there.
Got some decent looks at a nice Black-shouldered Kite, a Lifer for me and Api. 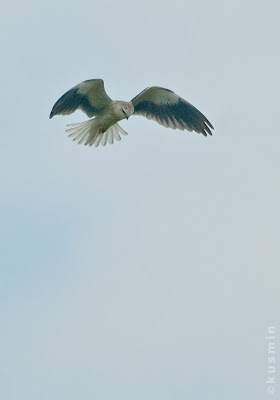 Heavy crop of distant flight theatrics, very much acted like an osprey 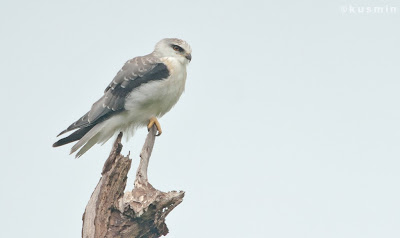 Eventually it at came down to perch, still a bit distant but i did get a couple of decent (sharp enough) looks to crop closer than i normally would.

At one point earlier on i had asked how hard it was to see Long-tailed Broadbill at Khao yai, it was a species i had not yet  had the fortune of seeing.
Some of my Thai photog friends on Flickr have gotten looks and the bird just looked so amazingly cool, i just had to get it one day.
Little did i know we would later drive by an active nest site right by the side of the road, it was lucky that Mr. Nine spotted the bird while driving by and told us to get out and setup, the bird would come back, wait!
Wait we did and amazingly it did eventually show itself with what looks to be a praying matis like insect in it's mouth. We knew that it was busy working and didn't waste time, took our shots quickly and then left, so it could continue it's feeding . 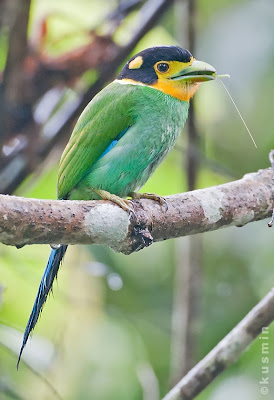 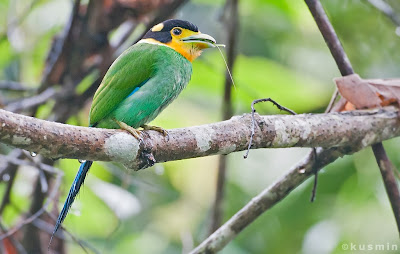 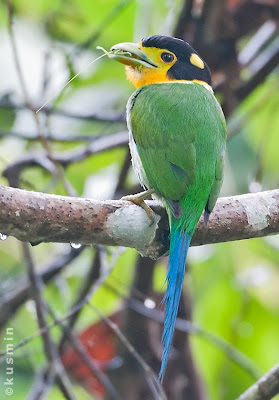 I told Mr. Nine then that it was the bird of the day and it didn't matter at all that we dipped on the Banded Kingfisher (another time for that bird, another time) it was all good!

As we wrapped up our day and on the way out we stopped suddenly at the lookout point because a small group of people were looking into some trees by the side of the road.
It was a Great Hornbill, and close!
I took a few shots and watched as it hopped around in the thick foliage and suddenly it flew off, across the road and down into the valley below. We had lost sight of it but as luck would have it i spotted it again, and took some longish distance shots that satisfied the soul of this bird photographer, when viewed afterwards. 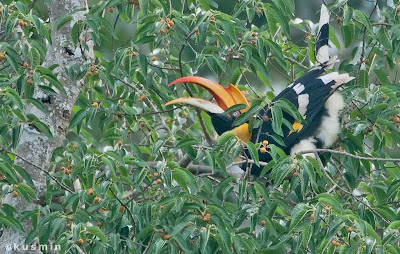 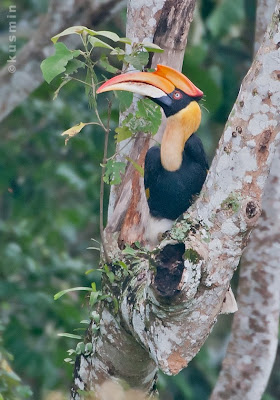 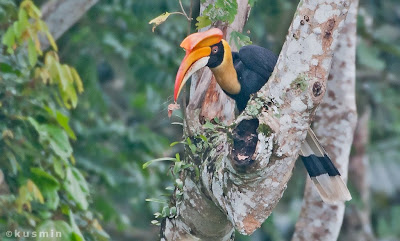 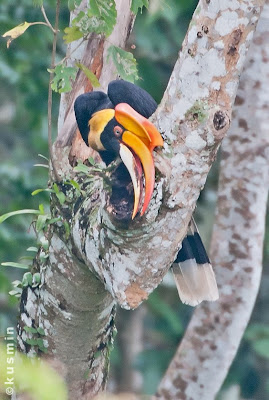 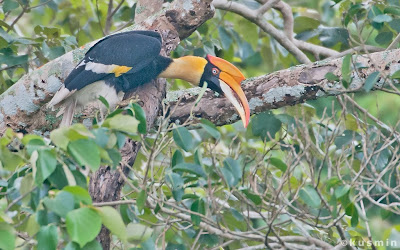 After all that we were happy and hungry.
Mr. Nine dropped us off and we parted ways. 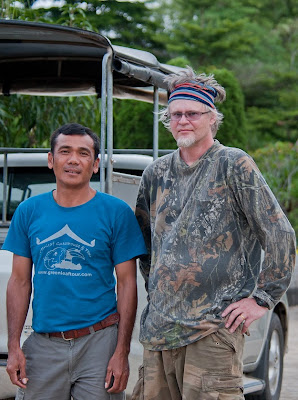 The dinner that night was awesome, they even had Heineken in the big bottles!