Posed the question "what made you a birder?" on a birding forum and it was interesting to read the responses.

Birds have been a part of my life since i was a wee lad, yet i only came to realize that fact recently.

When i was little i used to paint with watercolours, mountain landscapes and flaming sunsets, one of the first things i learned to add to the painting was the classic W and M stick bird shape, i suppose now that they were gulls, sunsets in particular popped when a few strategically placed birds were added to the scene.
i drew quite a few eagle head portraits as well but rarely tackled the full bird as i could never get the body right.

As i got older i became a cub scout and distinctly remember earning a badge with binoculars on it.
I'm sure one of the requirements was to list birds seen in your neighborhood over a period of time.
I must have spent some time bird-watching in Ladysmith back in grade 5 and not even known it, must have got a robin at least

One of the important moments for me i think was a family camping trip back when i must have been 10 or so.
Our car hit a bird, i remember it hitting the windshield and bouncing off, surely dead.
I cried in the backseat, traumatized by the event.

I never really thought of birds though, there were other things like BMX racing, skateboarding, baseball, fishing, reading sci-fi fantasy, obsessing over girls etc. to occupy my thoughts.

I had a budgie as a young teen though and we were pretty close, there are pictures of it on my shoulders, it was sad when it died as well.

There was a time when i used to catch snakes and stuff like that, this sounds horrible now that i think about it but i caught a few birds in the bush with my hands as well, always let them go of course.

I wish i had been a birder as a kid now that i think about it because i spent many summers as a kid on my grandparents farm in Finland, i could have began a European list ages ago

Only birds i can recall from Finland were the stuffed hunting trophies of pheasants and grouse on the mantle of one of my uncle's homes.
they were into hunting.

After that birds were out of the picture until i began art school after high school.
I began drawing birds again, only they were always drawn either as detailed pencil crayon paintings of chinese tin toy birds, or as dreamy cartoony visions whispering things in my ear (i kid you not

).
I worked the romantic angle with one such composition, calling it "a bird whispered your name" and used it with more than one girlfriend

There was other bird stuff in my art as well, i was using sharks and stuff too in my art but birds were definitely in my thoughts back then. 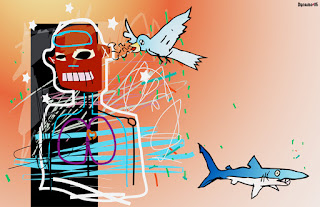 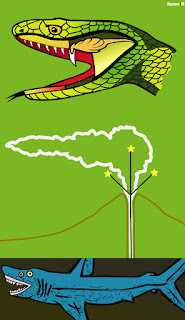 There was also a summer back during that art school period when a few of us partook in hallucinogenic drugs as was the fashion back in the late 80's.
We used to walk all night long, wandering great distances in the midnight hour and often finding ourselves on the waterfront in the dark.
Were were scared silly a number of times by these big birds that would squawk loudly before flying off.
At the time we never thought what species only that it was a mystical moment

i figured out a while ago that they were GBH's and cormorants that spooked us.

this pretty much brings me to near 5 years ago...

..only i have to mention one other bird-awakening moment before i met and married Audy.
I used to post a lot on a forum devoted to cool hip asian culture.
I used to get drunk and post random silly stuff (it was my first forum ever), one such post was more of a rant about what i called the Sleep Birds.
I was living by myself in North Van in an apartment (ironically only a block from where we bought our first and present home years later) and kept getting wakened up first thing in the morning by a strange bird song and it was driving me batty (in a funny way).
the call was a whistled Wheee (ascending) Whooo (descending) and i wanted to know just what bird was getting into my head

.
It's a pity that a lot of those drunken post have been taken away by the sand of time, i could only find 5 remaining threads and Sleep Birds wasn't one of them

My wife Audy and i had gotten into breeding and showing Betta fish as a hobby and my prime interest was in the short-tail wild-form plakat, although we successfully bred double-tails and half-moon fish as well and even won best in show novice class in the only competition we ever entered.
We retired from the fishy world after that as it was too much work, especially when Audy was finally able to legally work in the country and got a job. the pencil techinique is used in Thailand to train the fish to flare, it's called "angry-stick" technique.

After fish we decided to get into photography and developed a fetish for cheap plastic film cameras like Lomo's and Holga's.
We would shoot urban stuff like chinatown and back alley comps, no rules as far as composition, we were artists maaan above shot with Holga

At this time a co-worker caught the bird photography bug and picked up a D70 and a 200mm lens and started going out to Reifel to shoot.
We used to kid him at work about the birds but that all changed one day when he brought in a print of a American Wigeon taking off and i was impressed.

He was also on Flickr and because of him i joined as well, and the rest is history

I had originally wanted him to shoot close-ups of our show fish but in the end we ended up going out to Reifel one day, Audy with a newly bought D50 and low budget Sigma 300mm lens and me with a Fuji Finepix 10x zoom point & shoot.

That was it, we were hooked (more or less), i at least began to notice for the first time the variety of bird life and wanted to know their names.
We took your typical shots of R-W blackbirds, Marsh wrens, GBH's, ducks and it was cool. Our first bird picture on Flickr, shot by Audy. "Crane of Thought" by Audy I could understand now why my work friend was into it. (shame he dropped out of the game, he could never get close enough with his lens and got frustrated).

It wasn't till we saw a flicker digging up the cracks in the sidewalk a block away from our apartment one morning that we finally broke down and bought our first field guide (big black hard-cover Birds of Canada).
I started making a life list of shot species soon after that. Audy's interest in actually taking pictures of birds has waned but she still loves to get out birding with me when she can.

Apologies if this is far too long a ramble but i kind of wanted to get it into words for myself.