T-Minus a day and the packing and re-packing has begun in earnst.
Audy has it easy, she only has to worry about her Manfrotto carbon tripod, ball-head, D300 and a couple of small lenses (and maybe the 80-400VR if i can get her to carry it for me).
We recently picked up a sexy Nikon 1:2.8 D 24mm AF lens for her to play around with and it takes great candid shots i must admit. She will attempt again to do some HDR photography with tripod, the shots have been hit-and-miss for the most part and she hasn't done as much as she would like but when it's good, it's quite impressive.
I had mentioned before that i typically carried my lens hood in checked luggage along with tripod and gimbal head but have decided this trip to find room for it in my carry-on bag, i was just lazy before and didn't want to bother taking the custom lens plate collar off the lens so i could slide the hood in backwards, it was quite easy to do actually and i think it's a better idea, especially if my luggage goes missing or something.
At least then i will have my complete camera/lens/flash set-up, sans tripod.
A tripod could (in a worst case scenario) be sourced from a local photog for the duration of visit if need be, i'm sure. 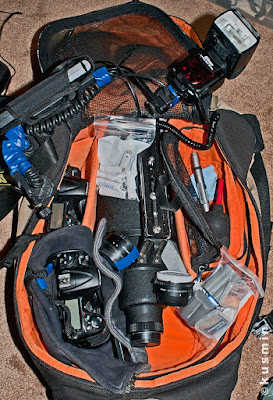 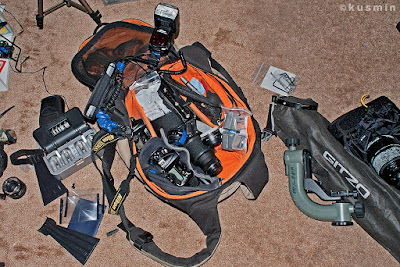 I've been using a Crumpler "Karachi Outpost" camera backpack since 2007 as my carry-on bag when flying, it has been with me to Mexico, Thailand (twice), Cape May, Ohio, Texas and Arizona (twice) and i love it.
I can fit my Nikon 500mm f4 AFS-I lens w/ hood, 2 camera bodies, my flash and flash bracket, 1.4x tele, extension tube, batteries, memory cards, cleaning brush & blower just fine.
On Birdforum the question of best carrying bag comes up all the time, one thing that is very important when travelling is that you look as inconspicuous as possible when carrying big $$ camera equipment. The Crumpler does not really look like a traditional, boxy, black camera bag, i could just as easily be a grubby backpacker as grubby bird photographer when carrying it.
The Gitzo carbon tripod and Jobu BWG Pro head along with rain gear, etc. will still go in checked luggage, some have mentioned using a courier to deliver equipement etc. beforehand and if this was a paying job it would make a lot of sense, the only person "paying" on this trip will be me though LOL.

Because it is the hurricane season down there i expect we will not get away without a bit of rain (or a lot of rain perhaps LOL) so i invested in a proper rain cover for my camera and lens. I would have bought the camoflauge cover available through the Naturescapes store but since i am going to a country where camo is forbidden unless you are in the army i went to Lens & Shutter and bought the black Kata cover they sell as it was in stock.
I have to say that it's a bit of a rip-off that Kata does not offer a dedicated long lens kit, instead i had to buy the basic camera cover as well as a seperate long lens conversion kit to fit the 500mm. Ah well, it's extremely well-made and looks durable, i'll give it that much, i'll let you all know how it handles in actual conditions later. 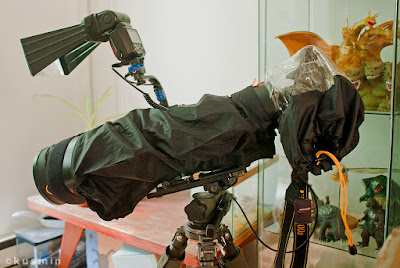 By the way, i will use a small clear mylar plastic cover for the flash that Audy made for me a while ago.
She made me a complete custom cover once but it didn't hold up to real-world conditions and we decided not to market it to others (there had been some offers to buy one if we did so).

As for storage of pictures during trip, in the past we have used an Epson P3000 40gb storage device/picture view as our SD and CF cards just plug in and download, 40gb however is kind of laughable as far as storage goes these days (i shoot in RAW and so does Audy) and we found during our last couple of trips that we had to do a lot of "weeding" of shots to fit more on, this is not good because the danger is there that a good shot will be lost by accident, so we got hip and picked up a 10" 250gb Gateway Netbook (Windows 7 starter) along with a WD 1tb external HD.
The WD is pretty sweet, no more power cables and on/off switches, it powers up once connected and uses the Netbook to power itself, looks reliable. I will leave the downloaded pics on the Netbook in folders and will back them up onto the external for extreme safety.
As well, a Hama USB 2.0 Card Reader accepts all possible cards.
We are set methinks. 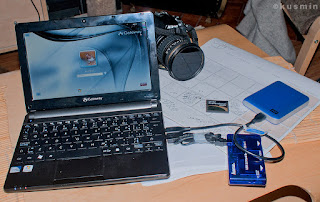 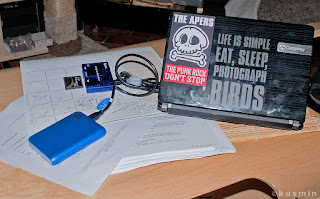 If only life were that simple eh?
Posted by Paul Kusmin at 11:38 AM