Oct 23rd
Max our driver pulled up to the Manta Lodge at around 8:30am and we piled our luggage in and took in some of the scenery on the Caribbean side of the island.

It was nice, postcard nice, there was one secluded bay that Max said the king of Quatar liked to pull up into on his yacht and spend a week, living i guess, like a king. 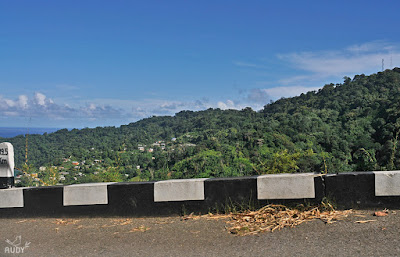 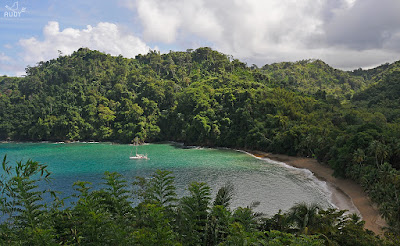 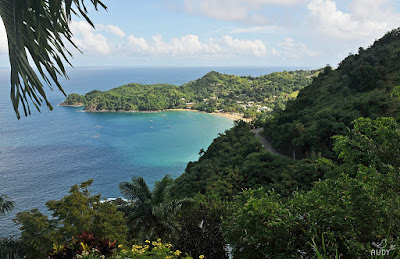 The Cuffie River Wilderness retreat was tucked away in the Runnemeade valley and was supposed to be quite birdy, the food was also supposed to be amazing, we would soon find out.
It was quiet when we pulled up, we would be the only guests the whole visit. The owner was away and her sister was going to look after us, which was fine. The hotel is modern yet rustic, clean and spacious, most importantly, with showers that flowed hot water.  The property seemed pretty overgrown and i couldn't see any obvious trails to wander down, once we walked down to the small bridge beyond their gate but other than seeing a jacomar and a few egret down by the water there didn't seen to be much.
The front of the hotel had 4 hummingbird feeders put out but no fruit was provided like at Asa Wright.
There were numerous Copper-rumped hummingbirds that seemed especially aggressive and protective about their chosen feeders, lots of bananaquits, a couple of Tropical Mockingbirds, and a couple of Trinidad Motmots along with a White-tipped Dove or two.
Blue-grey Tanager was seen as well by the elevated pool next to the hotel. 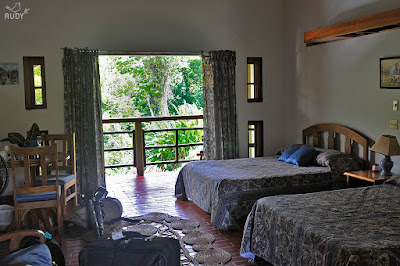 our spacious and open room
No room keys were needed here the owners felt so secure about their location i guess, that and the guard and dog posted out front every night helped as well i guess. 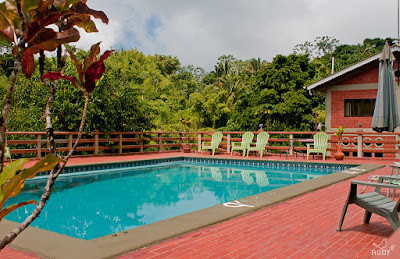 The place wasn't cheap, there was no fridge of hotplate in the room and the location, far removed from the main road meant that we didn't have any options as far as eating and would be relying on the home cooking, which we would pay for when the bill was tallied.
Our first lunch didn't start off so well though, we were served some mush steamed in banana leaves, it was supposed to have chicken in it but honestly  couldn't taste any. I prayed to myself that all the food wasn't going to be like this. I appreciate good food as well, I married a Thai and of course enjoy most Thai cousine, i like a bit of spicy too, so i'm no prude when it comes to trying new things but here's the thing, we were birdwatchers, out every morning, sweating and shooting, carrying my 500mm lens and tripod is like exercise at the best of times, after all that energy burned, my palate is not craving to be challenged, it just wants something easy to eat, and a ice cold Carib beer to wash it all down with afterwards. 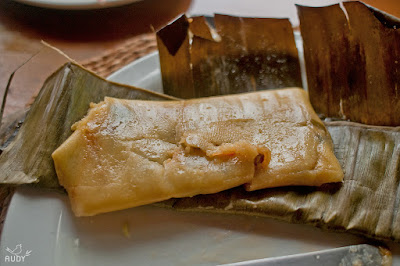 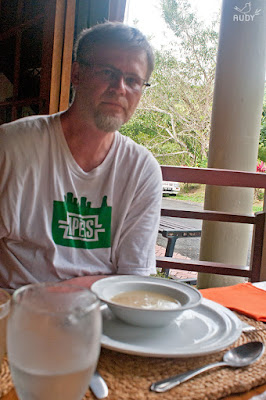 The soup was good in Trinidad and Tobago, not usually being a soup eater i would grab seconds, it was always that good (or maybe i was always really hungry LOL).

So why do birders come to Cuffie River?
Well, the main draw i suppose is the White-tailed Sabrewing, a large hummingbird not easily seen elsewhere. and not on Trinidad at all. The other bird not found on Trinidad is the Rufous-vented Chachalaca, there were many of them on the property, this was my 3rd chachalaca species photographed by the way. 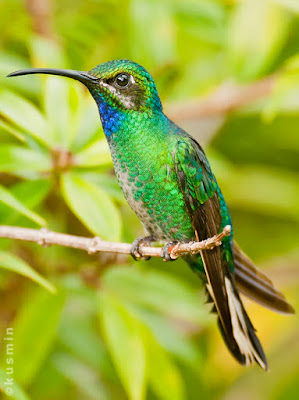 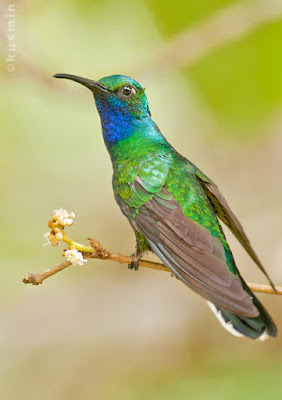 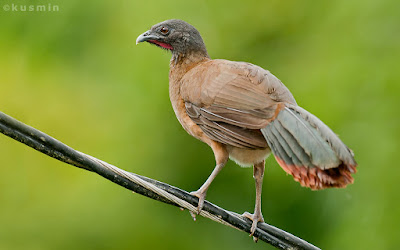 Rufous-vented Chachalaca
Got some other decent shots of hummers and hermits as well at Cuffie. 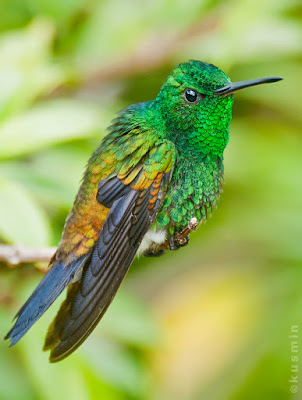 Copper-rumped Hummingbird
The Copper-rumps on Tobago are apparantly a different sub-species from their Trinidad neighbors, i couldn't tell much difference, except that they seemed more aggressive. We were told later that since all the male Ruby-topaz hummingbirds were all on vacation the Copper-rumps could get away with it, once the Ruby-tapaz came back, they would take back their role as dominant species.

One other bird species we never saw anywhere else was Black-faced Grassquit, a species that reminded me of our Dark-eyed Oregon juncos. 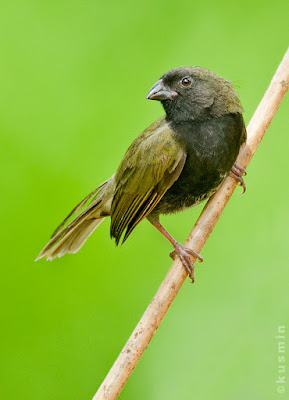 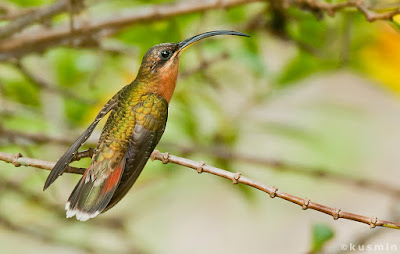 Rufous-breasted Hermit
A really tough species to get standing still, got some lousy looks at Asa Wright but when Audy spotted this hermits "secret" perch i knew i could get a decent shot. 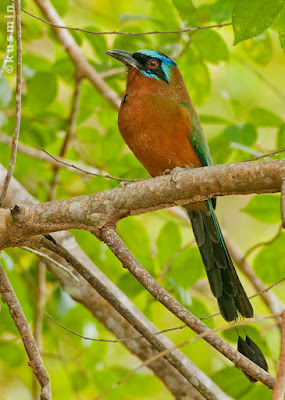 Trinidad Motmot
The motmots were quite tame at Cuffie River i have to admit.
Oct 24th
This ended up being pretty much a rest day for us, there was a small bit of rain in the morning and since yesterday, no new birds had come to the feeders. Actually, Audy spotted a White-necked Jacobin but it only seemed to come early in the morning. After nailing the species at Asa Wright i was happy to take a pass at trying for it. I spent time reading a BBC Wildlife magazine someone had left in the library and wondered why this type of magazine wasn't available here in Canada as it was a good read.
I noticed that Desmond, the award-winning nature guide employeed by Cuffie seemed to double his duties as a groundskeeper when not guiding people around the property.
We would have loved to take an introductory walk around the grounds with Desmond, apparantly his knowledge of the local plants and herbs, along with bird ID skills are impressive. I didn't think it was fair then, that we, who were spending 3 nights at the lodge ($240 US a night - no WIFI or TV), with no other guests around, were ignored because we didn't shell out an additional $120 US for a "3 hour walk around the grounds" with him. At least at Asa Wright, an introductory walk was free, and Dunstan cave was free after 3 nights, Cuffie should consider making Desmond available to paying guests (or at least provide a property map with trails marked), as it is, we didn't know where to walk and just hung out around the hotel or pool. Our one interaction with Desmond was when the shower knob stripped a thread or something and spun freely, i asked Desmond about it and he went and fixed it for us.

We did get our first shots of a Red-crowned Woodpecker, another of those species not found on Trinidad. 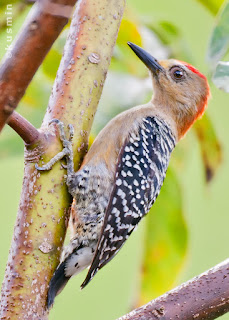 We spent a lot of time trying to shoot the Orange-winged parrots that would fly in large groups overhead us, it became a mission of Audy's to get an ID'able shot of them, before i nailed one down low on a branch our last night this was Audy's best effort. 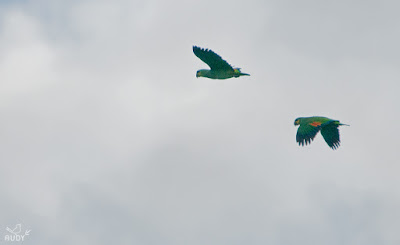 After dinner we were treated (as we were every night) to the antics of a White-tailed Nightjar, who would perch close to a light post, hawking insects, right in front of our dinner table, that was pretty cool.
The first night i attempted to get a shot or two under the natural light of the light post but it illuminated everything this unnatural green colour so i used some fill-flash at low power instead to snap a few shots, the nightjar didn't notice at all, it was pre-occupied by guarding it's perch from another nightjar that would attempt to land every now and then. 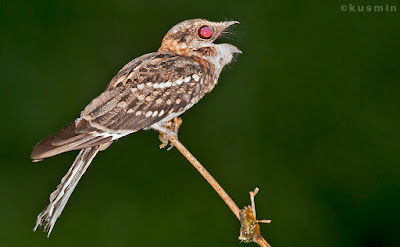 Tomorrow we would be heading out with Newton George, the guide we had run into in Speyside, we would be checking out the "Hilton" pond complex. i put the word in quotes because it's not actually a Hilton anymore but i think most birders will always know it by that name.