Oct 21st
According to airport regulations in Trinidad and Tobago, one must arrive for domestic flights 2 hours before their 14 minute flight. Because of this we woke early to get a ride to the airport, our flight was at 8am so we arrived at around 6:30am, check in was a breeze and i was thankful for booking online weeks ago, these flights were always full it seemed. I had never been on a smaller propeller plane and it wasn't as scary as i thought it would be. 14 minutes later we were landing in Tobago, roughly 8:30am.
We were picked up by a driver from Blue Waters Inn, funny thing was though that we weren't going to be spending two nights at Blue Waters at all, apparantly they had been undergoing renovations and i guess they wouldn't be done in time to re-open when we were to visit. This was all a surprise to me since there had been no mention of downtime on their website when i booked in August. So they booked us into a neighboring hotel called the Manta Lodge, right by the beach in the sleepy little town of Speyside, a haven for divers from around the world, the reefs were renowned, as was the marlin fishing. Birdwatchers came to Speyside as well, most to take a boat trip to Little Tobago Island, a small island, declared a national wildlife sanctuary. It used to be called Bird of Paradise Island due to the small colony of introduced Greater Birds of Paradise in 1909, these birds were wiped out in Hurricane Flora in 1963, one of the few hurricanes to hit the area, but one that devastated Tobago.
Anyways, our drivers name was Bully, although he said he wasn't one anymore, he had an actual name but he spoke so softly that i never fully caught it, Bully i could remember however.
He asked how we liked Trinidad, we said it had been good, but we had been looking forward to Tobago, he said "ya mon, your holiday truly starts now, you will love Tobago". The windy main road followed the coast up north to the less populated part of Tobago, Bully would point out the spots of interest as we drove, he had a way of always saying "well, how can i say this?" before answering anything but we found out the difference between goats and sheep on Tobago from him, also, that everyone knew him in Speyside. 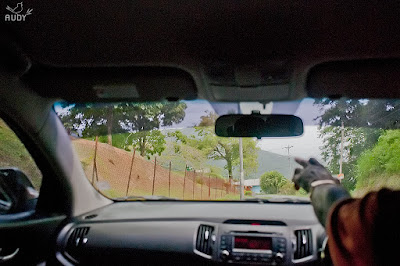 We mentioned that we were hoping to hook up with a Tobago bird guide named Newton George who lived in Speyside and Bully lit up with a gold-toothed smile and said "that's Newton's house up the hill there, he's my neighbor". Bully said he would let Newton know we were interested in a quick trip with him. 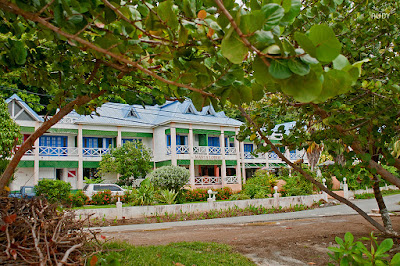 The Manta Lodge
We had to chill a bit before being able to check into the Manta Lodge so we hung in the restaurant watching the Bananaquits and Copper-rumped hummingbirds. Every now and then a Tropical Mockingbird or Carib Grackle would come check out the banana chunks or sugar water feeder. It was entertaining, but nothing new for us after Asa Wright. We were told by staff as well that there was a small problem with the water but it should be fixed in 45 minutes. This must have been Trini-time again, because we never did get water that day or night LOL. We were given a water bottle and told to use that to clean ourselves until the water was fixed "they are working on it right now.." but later it became "well, they can't work on it because it is too dark now.."

Audy had a bit of a fright when she opened her suitcase, turns out close to two dozen Soldier ants (or were they Flesh-eating ants) had decided to take the trip across the water from Trinidad in her suitcase!
What is even more bizarre is that while at the airport, Audy had her suitcase examined by a white-gloved security guard while we were checking our luggage. No ants were found during the search, does this mean the lady didn't actually look at what she was searching or are the ants really good at hiding? LOL.
Anyways, we stomped as many of them as we could since they were running all over our room and had big pinchers, also, we didn't want to lay ruin to the Tobago eco-system by introducing a foreign species, if the ants indeed were.
Just a really strange occurance, my suitcase had nothing buggy about it at all.

later we took a walk along the beach to the main drag and checked out a few of the shops, and had lunch at the Birdwatchers Restaurant. 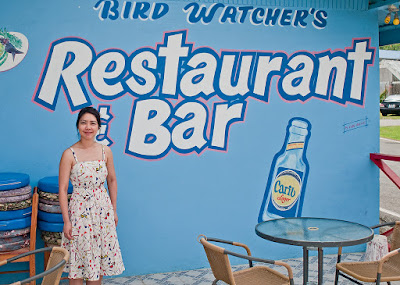 We had organized a trip to Little Tobago Island with the Manta Lodge as they offered it as one of the trips one could book and later in the afternoon a rasta called DeAngelo came calling, he told us it would be $37 US each plus a tip for the guide, it didn't really seem that he understood that my main purpose was to photograph the Red-billed Tropicbirds, i didn't really care about snorkeling. I agreed but felt uneasy about the transaction, we went for another walk later that day in search of a WIFI connection (some banking needed to be taken care of) and Manta Lodge had none. I came upon a local and we got to talking about the boat trip, he said that the going rate ws actually only $25 US each and no tip was required of guide, we were getting ripped off by Fear Not glass boat tours and i didn't like that. He told us to book with another company and someone from them would come see us the next morning, most importantly, he told us that going out to the island at 8am like i had planned would have been a disaster, i would not have seen the tropicbirds, and the light would have sucked, one needed to go after 2pm if they wanted to shoot them in flight like i did.

We raced back to the hotel (after stopping off at a small fruit stand to buy fruit), on the way back we passed a group of men sitting against a building on the other side of the street, suddenly one of the men got up and called out to me "are you Paul?" it was Newton George.
Bully had gotten in touch with him and the hotel had told him that we were out looking for a WIFI connection so he just hung out, it was a Friday evening and people were Liming, liming is what we call Chilling, Hanging Out etc., i asked a number of people where the term "liming" came from but never got a straight answer LOL.
We organized a day trip for Tuesday, we would be at the Cuffie River Retreat and he would come pick us up.
We were set.

We had dinner back at the hotel watching the bats come to drink from the hummingbird feeders, they would swoop all around us.
Later i checked out the beach by myself, sampling some tobago home-grown i had "picked up" on the street and rolled earlier, it must have been good, i was enthralled by the bright clear stars and later tried to count all the lights in Speyside (one could almost do it, the town was small), i could never get past a dozen before losing focus though. LOL.
Ah well, what do they say "What happens in Tobago, stays in Tobago?" lets leave it at that.
Later Audy was stressing about not being able to take a shower and i escorted her outside to the dive shop next door. We were told that a cold shower might be working there, the whole situation sucked but it got silly when we were brought out into the open next to the parking lot to a big sink with a water hose and Audy said "uh....." and i laughed and so did the hotel employee, "no, this isn't for washing, the actual shower is right over here". Audy didn't bother with a shower, just washed her face, i used the water bottle technique back in the hotel room and prayed there would be water the next day.

Oct 22nd
Little Tobago Island day. We got up early and headed out to a small bridge and fresh water stream flowing out onto the beach, this area is the entrance to Blue Waters and there is a ruined building and huge rusted water wheel there as well, the area was quite birdy as we found out, Speyside was impressing us. 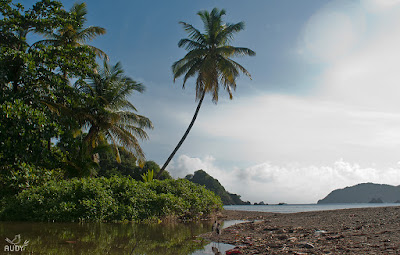 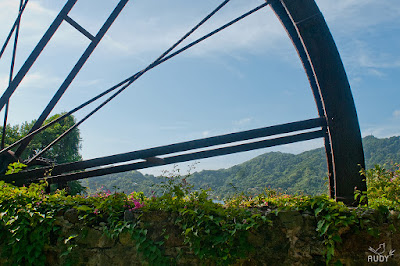 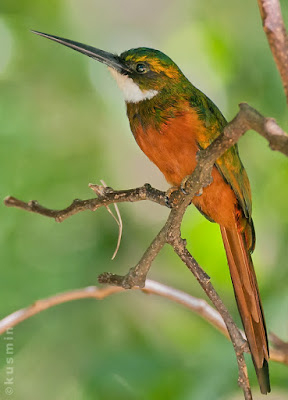 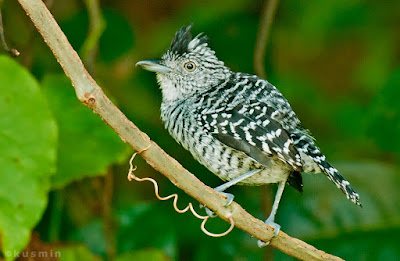 Barred Antshrike
We also saw Anhinga, Grey Kingbird, Blackpoll Warbler, Semipalmated Plover, Southern Lapwing, Belted Kingfisher (brief look), Rufous-vented Chachalaca, Caribbean Martin and Green-rumped Parrotlet in the area.
Soon it was time to head to the beach for the boat trip out to Little Tobago Island, we would pass by a smaller island called Goat Island that was once owned by James Bond novelist and birdwatcher Ian Flemming.
We met up with Trevor (i think his name was), a young dude with a gold tooth, he was cool and we headed out in a speedboat, much faster than a glass bottom boat, since we weren't all that interested in the reefs (well actually we were somewhat interested but no matter). We made a water landing as the water was too choppy to tie the boat up against the dock, took boots off and jumped. The hike up was a grind, i don't know why i suffered so much but i did LOL, the 20 lbs of camera in my backpack really started to weigh me down on the way up. After some sweat and humidity we made it up to the prime vantage point for tropicbirds. On the way up Trevor pointed out a Trapdoor spider hole and a White-tailed Nightjar that Audy shot through branches.
Hermit crabs were numerous on the trail as well.
the view was amazing, and lots of tropicbirds flew all around me.
Audy and Trevor decided to leave me to shoot them in flight while they walked down a steep set of steps to the rocks below, hopefully she would get shots of Brown Booby. 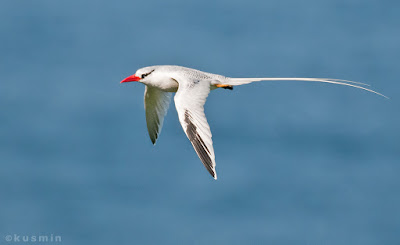 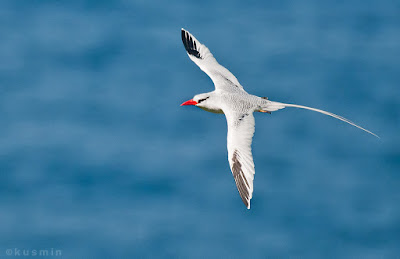 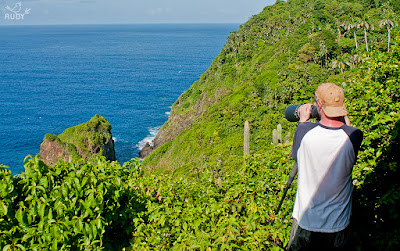 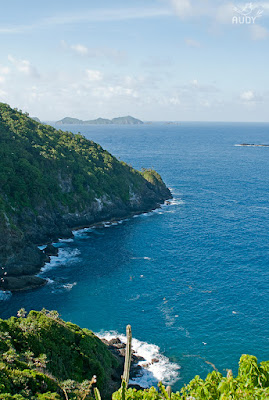 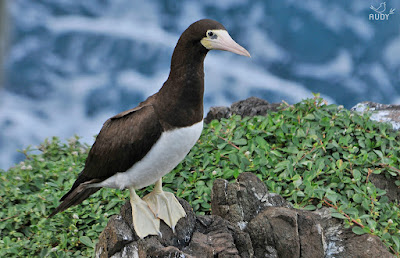 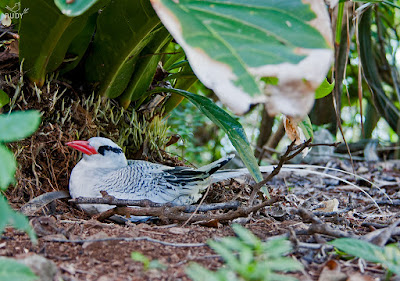 The walk down was a lot easier. 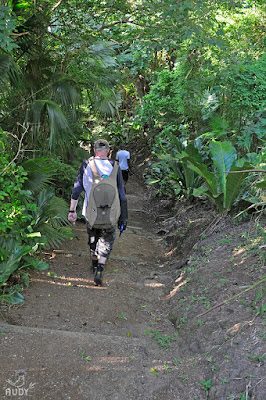 We thanked Trevor after we were back in Speyside and relaxed our last evening.

A driver from Cuffie River would pick us up in the morning and drive along the Caribbean side of the island to the small community of Runnemeade and our next stop, we would spend the next 3 nights at the Cuffie River Wilderness Retreat
Posted by Paul Kusmin at 12:24 AM