The condo in Cha-um was pretty plush, right by a private beach, our 12th floor condo looked out on the water, sweet.

When we first arrived i noticed many swifts darking about all over the place, at times there were up at eye level but usually below you, i should have been quicker on the draw for when i finally pulled out my camera (after relaxing on the plush bed) the bird activity had pretty much ended.
While i didn't get any shots of them, i believe the majority were House Swifts, i did get one long-range shot that was sharp enough to crop closer, of a Asian Palm Swift, a lifer! 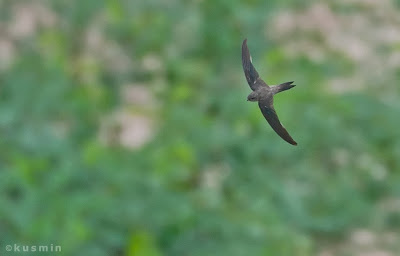 Well, we were lucky to get the car again next morning (July 16th) as Api's sister and aunt were going to take a bicycle ride to the local market that day.

Off to Lam Pak Bia one last time.

It was raining  a bit harder this morning but again, we were in the car, what did a few drops matter? i had Api's nylon jacket to cover the lens if need be, which it did at times.

Yesterday we had seem some plover-like birds on one of the fields and wanted to take a closer look today.
Obviously the rainy season in Thailand is not the optimum time for shorebirds but i had hoped to see a few, perhaps early-returning birds.

Driving closer to the field we spotted shorebird activity and i excitedly took aim with camera at the action.
We were able to pull up right to the side of road to get killer looks at these birds as they foraged without paying us much heed. 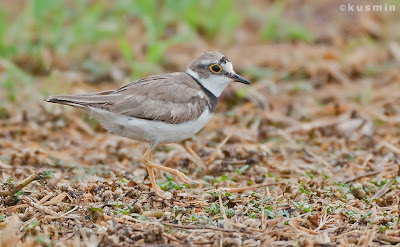 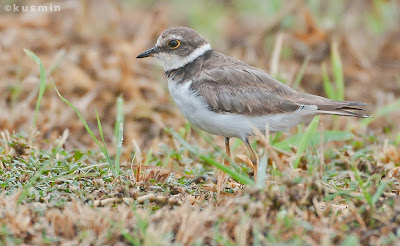 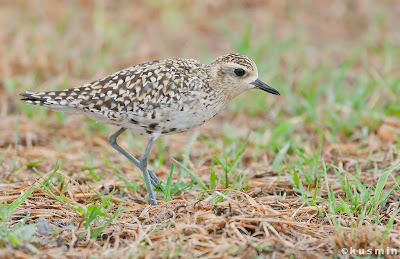 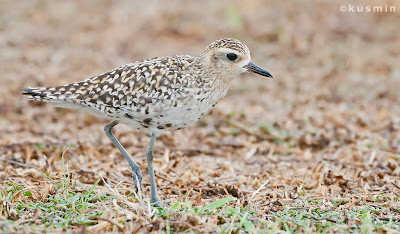 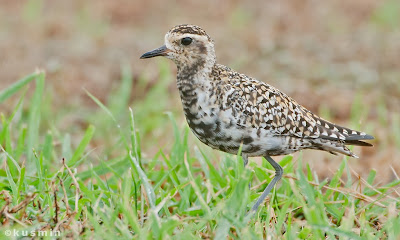 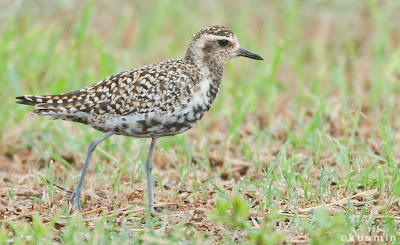 Pacific Golden Plover still with a bit of breeding colour.

I love shorebirds and was stoked to shoot those guys.
Next up was some close looks at Little Heron, wood-swallows, pipits and more ducks (but no snipes alas). 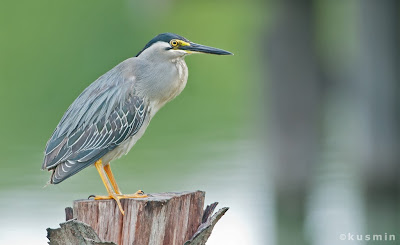 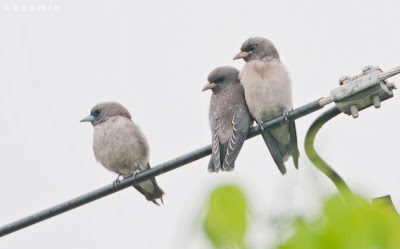 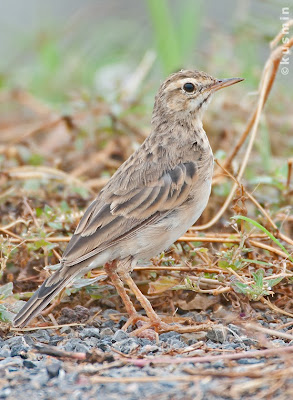 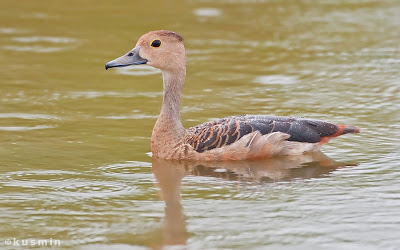 Next we saw an exciting sight, Painted Storks!
Another nemesis bird i can cross off the list, ever since a brief long-distance look years ago and seeing some captive ones at the Chaing Mai zoo during our first trip i was still searching.
Painted storks are actually considered an introduced species in Thailand but are now countable since escapees long ago established wild populations and seem to be expanding their range.
A nice change from the numerous Opened-billed storks all over the place.
Later we saw a large mixed flock of Opened-billed and Painted together circling together in the sky on the drive back. 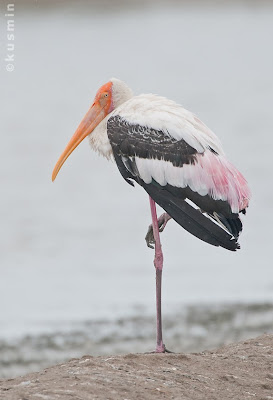 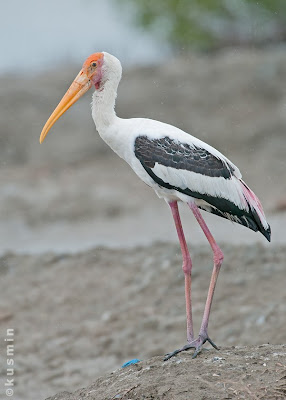 Shorebird activity continued when i spotted a Wood Sandpiper, which to me looks exactly like a Lesser Yellowlegs for some reason : ) 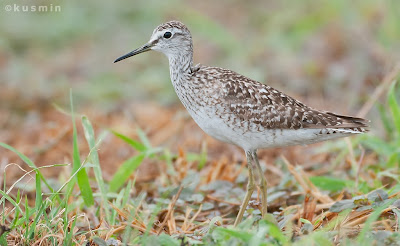 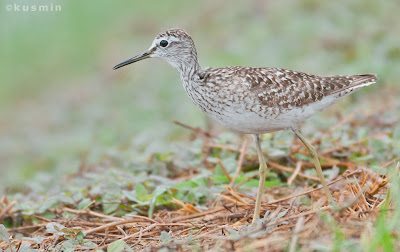 So we decided to really look for kingfishers as the day was getting on and we did have to bring the car back before the evening.
we decided to work the mangrove forest, little dirt roads criss-crossed this expanse of dense mangrove, occassionaly disected by beat-down little elevated wood walkways into the greenery. You couldn't really walk on any of them, they looked that dangerous. Colourful mangrove crabs dotted the landscape if you looked closely and while searching for kingfishers saw some bird activity by the side of the road.
Api, who was driving saw a couple of interesting little warbler-like species flitting about and i got a quick shot off of a kinglet-like bird with the noble name of Flyeater, a Lifer! 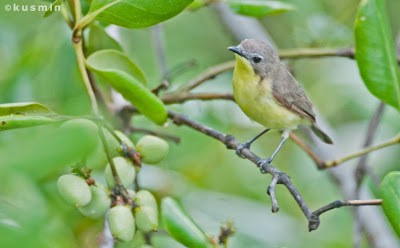 Did we see any kingfishers?

Yup, just after the Flyeater we came across a Collared Kingfisher, feathers ruffled due to the rain.
We were able to creep up almost next to it but the angles were tough and as soon as it became aware that it was being watched it flew off deeper into the woods, but not before some close looks. 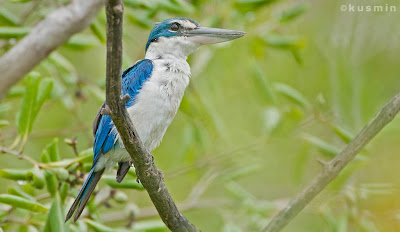 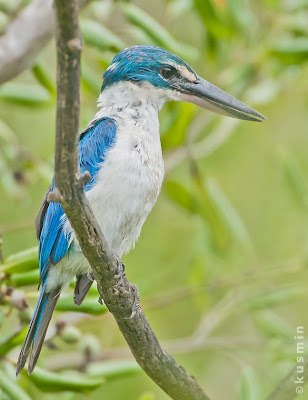 Collared Kingfisher
If that wasn't grand enough, i later got up close and personal with a White-throated Kingfisher and was able to shoot different poses as it just happened to be in a good spot and didn't mind the car one bit.
These shots top the first looks i got of this bird here back in '08, full-frame, what more is there to ask for when shooting the often challenging kingfishers of the world. 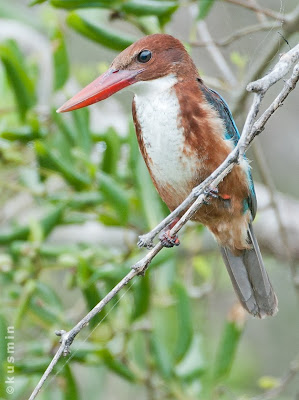 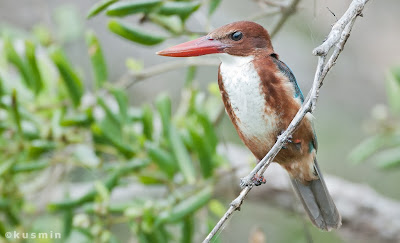 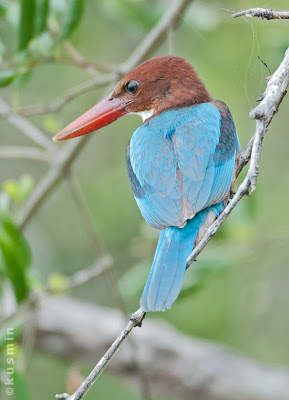 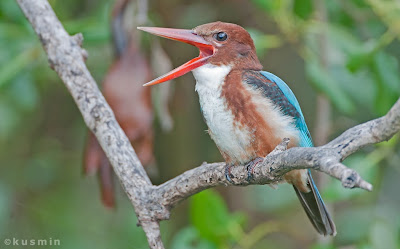 
What a way to end the morning!
Fully satisfied with the days shooting we drove back to Cha-um victorious.
Api's sister and aunt enduring a grueling bike ride that morning, much longer to market than either of them thought and didn't need the car in the end after all.
A seafood feast eaten at a restaurant next to the beach later that night was a nice touch, the Heineken tasted just right and the food was delicious, perfect. 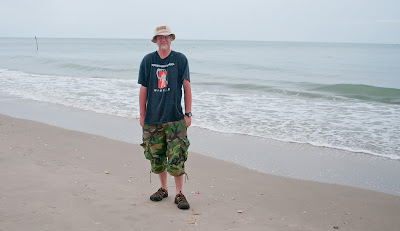 After this trip we just chilled in Bangkok till our flight back, we both bought new glasses, i picked up a new Casio G-Shock watch with a compass and world time, sweet!

July 18th, we fly out of BKK at 11:50pm on ANA Airways and i am impressed by the way they treated us, even in economy, lots of snacks, a tasty dinner and breakfast even though it was only a 6 hour flight to Japan.
Coolest feature was a live point-of-view feed of the plane taking off and landing that played on all the monitors, really cool, and a bit scary too. Oh, the only time i have had the pleasure of drinking a can of Suntory Pilsner, a delicious thirst-quencher for those long flights.

July 19th we arrive at Narita International Airport at 8:30am and have a 9 hour wait for our Air Canada flight back to YVR (Vancouver), we spend the time wandering around in the duty-free stores, and watching day-time game shows on a giant tv that boggled the mind,i couldn't for the life of me figure out what was going on, something about going out to stores and buying certain items, it didn't make any sense, even with my ipod and good tunage sending beats through my cranuim.
What seemed a lifetime later, it was nearing flight time, we would soon be on our way for the final leg of our journey but not before i tried out the Japanese McDonalds just to see what a Big Mac tasted like in Japanese (just like what you expect it to taste like) and the lineup must have been biggest in the whole airport, i had time to kill and waited while Api rested in a chair nearby.

Air Canada was frugal in economy, that's the best i can say about the service but we made it back home, after having to endure 9 hours of a sick little kid behind me kicking the back of my chair and trying his hardest to infect me with his cold, which he did quite successfully after all.

A Canada Line, a Seabus and a bus after breezing through customs and we were home again, safe and relatively sane : )

I didn't mention the trip over but will say now that we flew with Air Canada from YVR to Shanghai, China, before connecting with a Thai Air flight on to Bangkok.
I thought it would be cool to go to Shanghai and eat real Shanghai noodles but it turned out that we didn't have much time to relax due to having to collect our luggage and go through customs.
Kinda sucked, but not too much, a better experience than our transfer through Beijing a few years ago.

Back to the local birds now!