I've wanted this species for a while, missing it in Arizona two years in a row.
I found out about this fella showing up at a feeder in Kerrisdale way back in 2010.
At the time, i was given an invite by the owner to "view" it only, she wouldn't allow photographers onto her property, fair enough but if i couldn't shoot it, i couldn't list it so didn't bother.
Time goes on, i visit Arizona hoping i'll get it down there in it's natural habitat instead, no dice.
And now it seems like it's come back to the same feeders after an absense and people are getting views of it from the alley, i'm thinking i might have a shot at it finally.
This morning Audy and i went out to Camosun and 33rd and staked out the alley for an hour, getting brief distant looks every 15 minutes or so and then it would fly off somewhere.
Audy did some searching after i asked her jokingly to find the "secret perch" as the looks from the alley weren't exciting me all that much.
A while later she runs back and tells me that she did indeed find the "secret perch" (nowhere near the feeders or alley, that's all i'll say so don't ask) and i proceeded to get some shots i could be excited about, finally.
Big North American and BC Lifer of the Day! 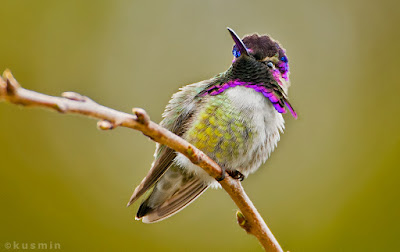 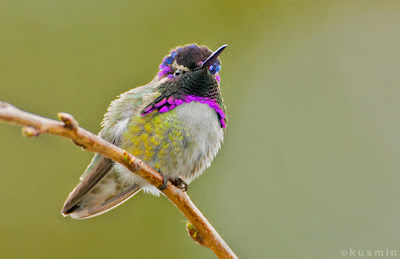 Congrats! Was it a lifer for Audy, too? Congrats to both of you. Nice to get on home turf.

Thanks Dianne, technically, we both saw one at the Arizona Sonoma Desert Museum in the hummingbird aviary when we visited last but they were pretty much captive and not really countable so it was nice to finally nail one here on home turf. : )

You definitely deserve the reward of checking off this lifer after your hard work and perseverance!
Beautiful captures Paul!