Trinidad & Tobago 2011 - Planning the next Adventure

Ohio in May was a blast but it wasn't our traditional yearly holiday, plus i went solo and Audy had to work.
Last year we did Thailand in December and this year i couldn't wait until December so October seemed the next likely time for us both to be able to get a couple of weeks off.
We started planning this trip way back in July, since we had a good year so far with homestay students, it helped finance what i hope will be a enriching trip for both Audy and I.

I did a lot of research online (as i always do when planning a birding trip) and wanted to find a location that was ok weather-wise in October.
I had read that Trinidad and Tobago had a short dry period in September and early October in their rainy season, i also read that they were relatively safe from hurricanes, although not completely immune, the risk was less than other more northerly Caribbean islands. 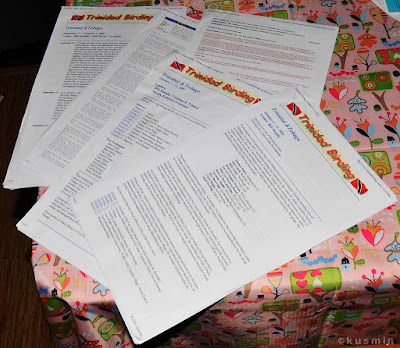 It's proximity to the mainland of South America was a big draw,  i read one birder describe it as "South American Birding 101", a large concentration of tropical birds on two small islands and a good introduction to tropical birding in a relatively easy environment.
I also read about the Caroni Swamp of Trinidad and the Scarlet Ibis in the book "50 Places to go Birding before you Die" and it seemed we had a destination. 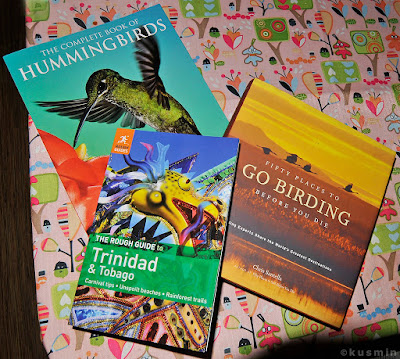 When Glenn Bartley came back from a exploratory expedition to T&T with amazing shots of beautiful hummingbirds and other tropical birds it was a done deal.
In a perfect world i would love to take a photo workshop with pros like Glenn or David Hemmings but i'm not a retired doctor, just a guy living paycheck to paycheck pretty much, when there is a will, there is usually a way though and doing the "independent traveller" thing seems the most economical in this day and age.
By the way, having a wife who understands the need to focus on birds when travelling is a big help, i couldn't do it without her.
All the information to plan a trip is available on the web, you just have to spend some time hunting it down.
I know some birders prefer the security and camaraderie of a larger group but for the bird photographer, smaller groups are preferable.

Photographing birds has become my passion and whenever my interest is piqued in something i go all out in an effort to master it, thankfully there are a lot of great books to inspire those who strive to bring their work to the next level. 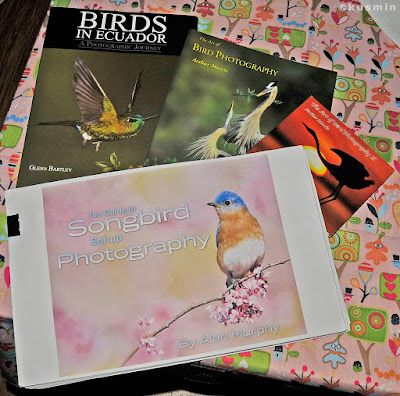 A destination like Trinidad and Tobago seemed like the perfect place for those seeking to photograph beauty, the birds look amazing, so colourful and well, just darned tropical.
Getting my first Toucan would be a lifes dream, growing up with Toucan Sam, it seems only right to search him out.
I knew that i would have to expand my research from just online, my book fetish needed to be quenched.
I love to order online these days, so easy and the anticipation that builds when waiting for a package to be delivered is a thrill i enjoy. 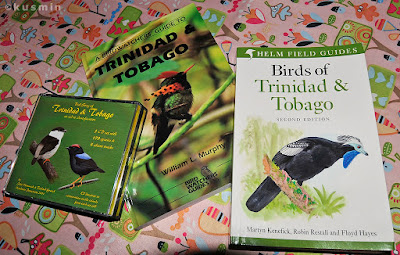 Was able to get a bird song cd set for Trinidad and Tobago which is now loaded into the Ipod.

I consider myself a bird photographer but am also of course a birder, i love a good Birder book, i find them inspirational and addictive, much like the very act of twitching, one needs more and more after a while. 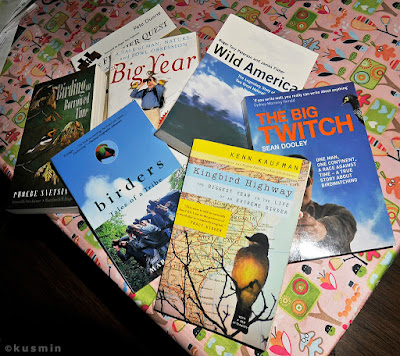 After we had decided on Trinidad and Tobago i remembered an old Traveller Stamp Album i had as a kid (and still do to this day), must have gotten it new in 1977, i was into collecting from an early age, my grandpa (Ukki) was the same way i think, he had a huge massive stamp and coin collection, i never took stamp collecting as far as he would have no doubt liked judging by the empty pages but for some reason i thought that some of my favourite stamps had come from T&T, today i searched out the old album, and guess what? i was wrong LOL.
Only one measly stamp.. 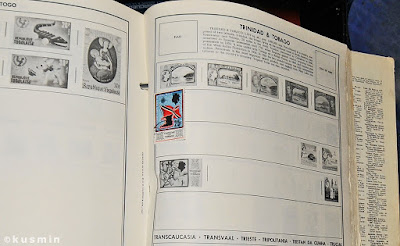 Anyways, of course we will hit up Asa Wright Nature Centre in Trinidad before we jet off to Tobago, 4 nights at Asa Wright guarantees us a guided trip to the Oilbird cave, so hopefully it will be worth the cost per night, kind of hurt financially - and this is the reduced low season rate, i'm doubly sure that it will be worth it though, can't wait.
Asa Wright will also be able to organize any guided day trips to other birding destinations in Trinidad so we wil look into that when we get there.

Tobago will hopefully be a blast as well, we will divide our time between Blue Waters Inn (and the close vicinity to Little Tobago Island and it's seabird colonies and Tropicbirds) and the Cuffie River Wilderness Retreat, both two well-known birding destinations so i think we won't miss too much by not being in a guided group (i hope).

Since August i have been checking the online newspapers from Trinidad and Tobago to get a feel for the present political and economic situation, the news hasn't been encouraging LOL.
No sooner had we paid for our tickets (one connection thru Toronto) than a State of Emergency was declared throughout Trinidad and will likely stay in place throughout our visit. A curfew is in effect, the real reason for the SOE is kind of murky and it seems to change on a daily basis, and there seems to be no definate date that it will be lifted but crime seems to be the main reason for it, Trinidad's close proximity to South America means it is a desired transfer point for cocaine on it's way to the USA.
Crack cocaine and gangs are a big problem, as is robbery and murder (so far in 2011 there have already been over 200 killings), the capital city of Port of Spain was recently described as more dangerous than Baghdad by a major humanitarian agency. Staying away from the big cities when travelling independently would seem to be a wise and safe choice. We have arranged to have transfers directly to our destinations from airport to resort in all cases so feel quite confident that we will arrive safely.
Tobago is supposed to be far more safe and laid back than Trinidad but crime is still rampant there as well i read, while crime against tourists is rare it does happen, they seem to prefer using machetes during attacks, news agencies describe it as "getting chopped".
Recently, in a bizarre turn of events, a large shipment of Marijuana was intercepted at the airport from Jamaica hidden in boxes of frozen chicken parts (brings new meaning to Kentucky-fried), Trinidad is supposed to be a big grower as far as the weed and Rasta culture is concerned so having it being smuggled into the country seems odd, possession is also a jailable offence and nothing to toke lightly, this isn't BC after all LOL.

Camoflauge clothing is banned in T&T by the way, a big blow to this bird photographer who freely admits to a certain fetish towards the pattern, ah well, loud yet "earthy" Hawaiian floral print shirts it is then.

If i feel motivated at a later date i will document my camera and lens, flash etc. details, what i will be bringing on the trip, how it gets packed and so on.

Just a couple more weeks of work and a much needed break for both Audy and myself.

Starting to feel "Irie" mon - cue the Bob Marley and Calypso music just about any time now...
Posted by Paul Kusmin at 4:26 PM

I love the new look to your blog. Great job. I'm almost as excited about your trip as I'm sure you guys are.