Decided to head out to Manning Park yesterday to look for Boreal Chickadees and Townsend's warblers.
Every time we have gone to MP in the past we have always concentrated on the lodge area, Lightning lake and Strawberry Flats area but on the other side of the highway is a road that takes you up into the sub-alpine meadows and finally we were going to check it out.
Not too early a start and we were on location by around 9am.
On the drive up saw a car parked by the side of the road and two photogs checking something out on the slope side, of course it had to be grouse, i decided to get out there as well and soon realized i knew both the photogs, Peter a Czech who i had met at Iona and Boundary Bay previously and Doug, who i see quite often, most recently the weekend before at Iona. We were all a bit surprised to see each other and proceeded to get some shots.
The adult Sooty Grouse (with a number of juveniles in tow) wasn't cooperating at first and stayed in the shade and Peter figured there would be plenty of more grouse where he was taking Doug further up the hill so they left and i stayed a bit longer.
I don't know how they fared but i'm glad i hung it out as i eventually got some pretty decent shots in some alright surroundings. 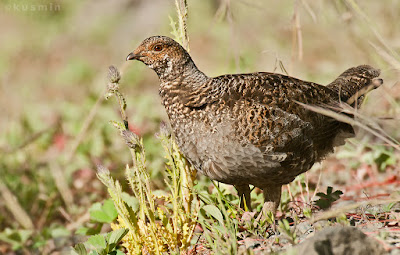 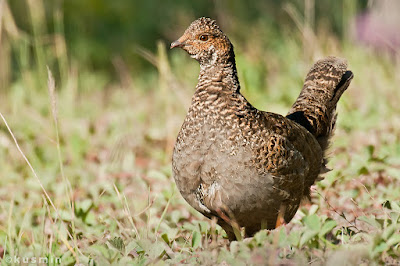 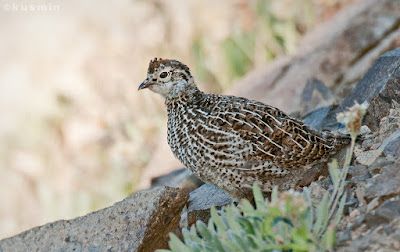 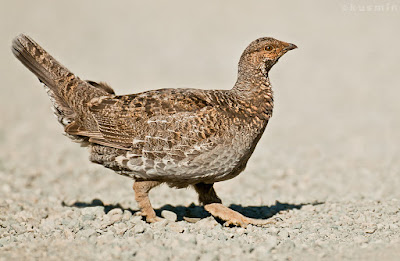 Afterwards, we too continued on our way up the hill eventually ending up at the top by a radar tower.
I was originally planning to hike the Heather trail but liked what i saw of the area around the radar tower and we walked the Paintbrush trail instead. Loads of mountain wild flowers and Audy had fun shooting them with her camera. I saw a number of birds but they were all in one loose flock, lots of Dark-eyed juncos along with what looked like juvenile White-crowned sparrows. Didn't see any Boreal chickadees unfortunately but did get a quick look at one Mountain Chickadee that disappeared before i could get a shot off. As well, saw a pair of Townsend's warblers flying about but looks at them were into the sun and they were too far off for anything decent. One scraggly looking Yellow-rumped warbler could have been a juvenile perhaps.
Heard a Red-breasted Nuthatch as well. Saw no grouse however.

On the way down Audy wanted to stop at a lookout parking lot to get some shots of the landscape and while parked i noticed an active group of Clark's Nutcrackers working the crowd for handouts. Looks were of the excellent variety and i couldn't resist pulling my gear out. I was planning to stop at the lodge for these guys but i much prefered the perches and light angles here at the lookout to those at the lodge. As well, a pair of ravens made an appearance, would have of course liked more BG but whatever. I'll finish off this post with a chipmunk and a pop celebrity i spied ; )